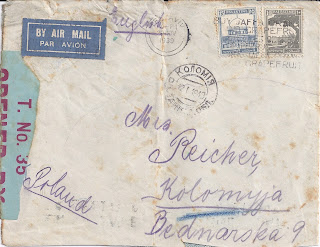 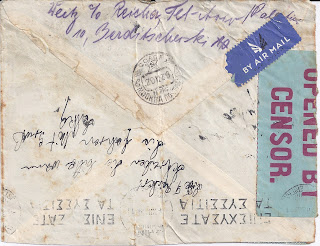 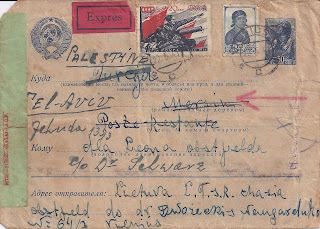 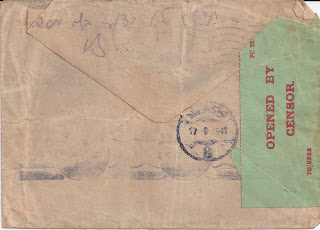 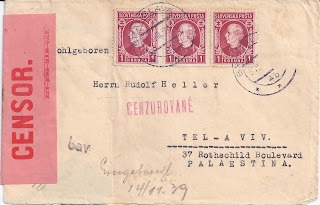 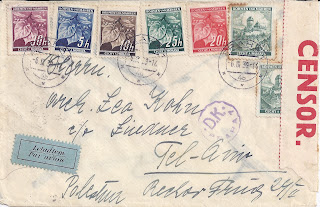 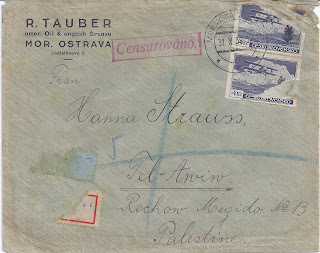 Posted by trevor pateman at 08:42 No comments:

Last Chance to Write: Some Examples from World War Two

Civil War disrupts the movement of people and post. War stops the movement, usually from a date which can be stated - the day War began. Of course, in the build up to War, disruption normally occurs as well.

In Central and Eastern Europe, as World War Two approached, there were many people trying to stay in touch with family members in foreign countries - or to find ways of getting to those countries themselves. Jews were the most obvious and largest group writing abroad or being written to. If you had a chance to write, then you wrote, and if people wrote to you - that was great news in itself!

Here is a cover sent from what I read as  WIEN 8,  29 8 39 - less than a week before the German invasion of Poland -  franked to 25 Pf. with Hindenburg rather than Hitler adhesives. It's sent to two people with what I take to be a Jewish name [ ... but can someone explain why the name is written as "Bibersteni" and not "Biberstein" ?] living in Jerusalem, then in British Mandate Palestine. The letter arrived - this is shown by the standard British censor tape. Interestingly, there is no sign of  Censorship in Vienna. Nor is there any indication of the route taken by this letter (Click on Image to Magnify): 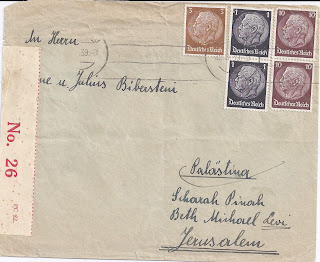 Much more surprising is this next letter, sent from BAD SCHANDAU 7 3 41 and addressed to Bucharest where it arrived (the backstamp is dated 20 MAR 41) . The addressee ( "Fräulein Dr Lili Simon") has a name which I assume to be Jewish [see now my Footnote*]. From Bucharest, it was forwarded to Jerusalem - and again it got there, as shown by the British censor tape. This letter appears to have been censored when leaving Germany and may have been censored again when leaving Bucharest for Jerusalem. Though Romania formally aligned itself with the Axis powers on 23 November 1940, it still proved possible for this letter to travel to Mandate Palestine. Either Romania counted as a Neutral power or else Palestine did, which would account for a second German censorship when the letter was forwarded. Still, my guess is that the addressee was very surprised to receive this letter, though unfortunately we cannot tell when: 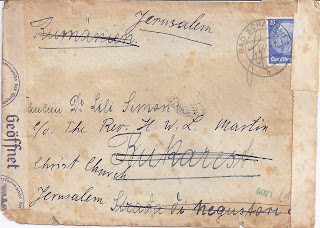 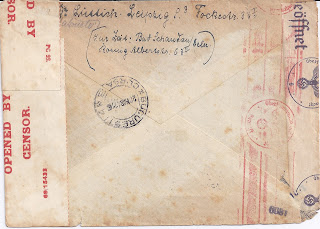 Much less surprising is this final cover, sent from TEL NORDAU TEL AVIV 11 Fe 41 and addressed to Romania [ over a month before the cover from Bucharest], but which got no farther than the British censor in Tel Aviv - after which some other official added on the front in red ink "No Service".This letter was sent after Romania had aligned itself with the Axis but some months before the Iasi (Yassy) Pogrom at the end of June 1941, which claimed between 13000 and 15000 lives: 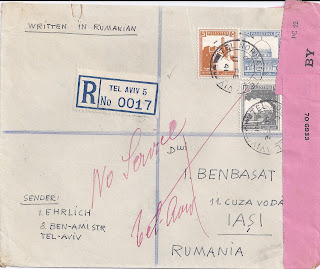 All three covers are from the drs. Avo Kaplanian collection, sold recently at Heinrich Köhler, Wiesbaden. I will show a few more covers from this collection in my next Blog.

_____________
* Footnote added 7 April : Google "Dr Lili Simon" + Jerusalem and you discover that she was a Jewish or Hebrew Christian, engaged in missionary work in Romania until 1941 when political circumstances dictated her move to Jerusalem. Her Christianity explains her c / o address at Christ Church, Jerusalem. During the War, she taught in a Hebrew-language Jewish school in Rehovat where it was known that she was a Christian. It seems that after the War she returned to Germany.

Posted by trevor pateman at 07:07 No comments: