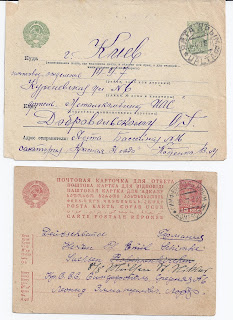 Posted by Trevor Pateman at 00:47 No comments:

In my areas of philatelic specialism the question is often asked, Were these stamps really issued?
To answer this, you need answers to several other questions:

Were these stamps “available at the counter” – even if only for a short period of time – and would they have been used to frank mail brought in by “an ordinary member of the public”?

What did the post office/s do with the letters franked with the stamps? Did they have the ability to put them into a mail delivery system – and was that system local, regional, national or international?

A key part of this set of questions is played by the “ordinary member of the public”. If the stamps will only be brought out for known philatelists (dealers or collectors) or, say, for the local military commander who has ordered their production, then in the ordinary sense of the word, they are not a regular issue. They are stamps produced by or for favours. On the other hand, the stamps may have franking validity and may succeed in getting a letter carried from A to B in which case one might say that they had a “limited issue”.

For many stamp issues, the vast majority of used stamps are found on (obviously) philatelic mail. The British Empire used to control many small and remote islands – still does – and issued stamps for them. But in some cases as many as 99% of all covers now existing are philatelic.

But what counts is the 1% of non-philatelic mail – the same stamps were available to “ordinary members of the public” (maybe there were just two of them) as well as philatelists.

That is why the 1% (or even the 0.1%) is so important. For example, it is the 1% or less which shows that the stamps of the Northern Army and the North West Army were issued. There clearly exist cards and covers which were not sent for philatelic motives. It’s true that the distances they travelled are mostly quite limited – backwards into Estonia, most notably. But a few made it as far as Finland and in that case you have an even stronger case for saying that the stamps were issued and served to get mail put into a mail distribution system. Similarly, though their period of use in December-January 1918-19 was very short, the original map stamps of Latvia saw limited non-philatelic postal use, both on internal mail and on mail to Germany.

The really difficult questions arise with stamps which appear to have been issued but for which evidence of ordinary postal use is now missing. In some cases, there are not even philatelic covers. There are undoubtedly stamps which were officially prepared and would have had postal validity if used but which went straight from post office counter to waiting philatelists who bought everything for onward sale as mint stamps, none even stuck on philatelic covers. This would be true of an unknown proportion of the combinations of stamp and overprint  issued by Dashnak Armenia which could have been used but weren't.

The only really clever guy in the confusing postal history in which I specialise was Dr Ivan Cherniavsky who produced the 1919 CMT overprints of Kolomea in co-operation with the occupying Romanian military commander. Cherniavsky required that quantities of the stamps be distributed to the post offices which the Romanian authorities controlled. These post offices actually served very few people in a widely illiterate countryside. But they did serve local lawyers who were always sending petitions to the district court in Kolomea, and the stamps got used on their registered mail.

Dr Cherniavsky was in charge of the district court in Kolomea. His clerks simply passed to him the one hundred percent genuine commercially used envelopes which brought petitions to the court. Cherniavsky was an unusual collector. He was interested in ordinary commercial mail.... He took a chance that no one out in those small towns and villages would spot the opportunity to buy the CMT stamps for onward sale. As far as I know, only at one office did some other collector/dealer get to secure part of the issue. Elsewhere, it seems that everything went to the lawyers and back to Kolomea, as Cherniavasky intended.

Posted by Trevor Pateman at 12:19 No comments: