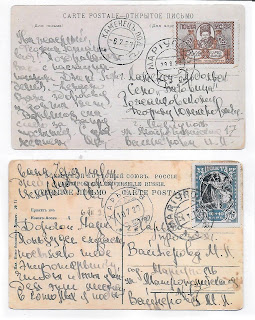 How can you tell if a cancellation is a fake when you don’t have examples to compare it with which you know to be genuine? Sometimes a cancellation just looks wrong - wrong style, or the ink isn’t like the ink you would expect to see, and so on. But these are not decisive considerations.

However, sometime you can tell that a cancellation is bad by something internal to it - something which stares you in the face and tells you it must be wrong. Look at these two cards. To my eye they have FAKE written all over them. But right now I don’t have enough reference material to prove that. But then I notice something which settles the matter.

Look at the two receiver marks, one for KAMENETS POD. and one for KHARKOV in different styles - letters close together on KAMENETS, spaced well apart on KHARKOV, and so on.

In other words, the same device has been used to add the date line to the Kamenets cancel and to the Kharkov cancel. That seems to me fairly decisive….

The next step, if someone wanted to take it, would be to lift the stamps. Sometimes there will be the trace of an old Imperial small-sized stamp which has been removed - in the past, my understanding is that people went around flea markets looking for cards where the stamp hadn't been cancelled or had only a bit of a cancel which could be covered up with a larger replacement stamp. Better still would be a card which had been written but not sent through the post.

Sometimes a replacement stamp when lifted will show a hinge remainder.

But in the present case it's not necessary to make such investigations; it would only be  out of curiosity that someone might do so.

Posted by Trevor Pateman at 03:46 No comments: