Any collector of Imperial Russian postal history who has gone through dealer boxes will at some point have come across money letters from Russia to Mont Athos, one of the peninsulas south of Thessaloniki and at the time part of the Ottoman Empire. They will be dated between the early 1870s and the early 1900s, after which the postal money transfer (Perevod) method replaced them.

The money letters will be addressed to three possible destinations: the skete [monastery] of St Andrew (Andreeveski Sikt/Skete), the kellion [cell] of St John Chrystostomos [Kellio St. Ioanna Zlatousta], and perhaps less frequently to the skete of the Prophet Elijah [Ilinksi Sikt/skete]. These were all Russian Orthodox establishments, recently created with extensive support from the Imperial Russian government. It is unlikely that any money letters will be found addressed to the centuries-older Panteleimon Monastery, also Russian Orthodox.

The reason is simple: the first three institutions closed in the 1960s and 1970s as the last monks died off. The Panteleimon still exists and in recent years has been restored and expanded with fairly massive support from the Russian government and Russian oligarchs. Mont Athos has been part of Greece since 1912-13 but still enjoys considerable autonomy; for example, it is exempt from EU free movement rules and if you want to visit you need a visa and to get a visa you need to be, at least, male. Access is by boat from Thessaloniki; there is no land route and that has always been the case. There is a small port (Daphne) and landing facilities at the Panteleimon monastery.

When the three other monasteries finally closed after decades of decline, monks from the senior monasteries on which they depended (The Greek Orthodox Vatopedi, the Serbian Hilandar) tried to raise funds by selling off secular archive material. Documents and objects of religious significance were removed to other monasteries, but secular papers were taken by the sackful or suitcase full to Thessaloniki and Athens. The task was not easy - there were no roads only paths on Athos, no electricity, and moving stuff around wasn’t easy. The monks eventually gave up on the project. Here is a link to photographs of the administrative offices of one of the three Russian institutions,  taken in the past five years by a visitor to Mont Athos. They show the remains of an archive in a room which is now open to both winds and rain; just keep scrolling down through the images

The money letters themselves look like this and I want to propose two theories about them. 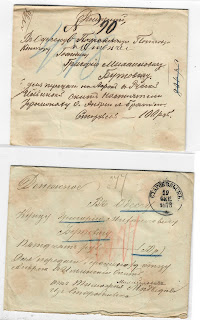 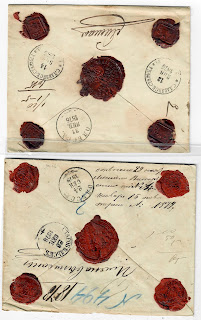 First theory. The letters normally have a despatch cancel and a transit cancel of Odessa. The long and complicated addresses nearly always contain a routing “via Odessa”. But only in a very, very small number of cases is there an arrival mark. There was a Russian ROPIT post office on Athos, mail arrived in Russian ROPIT boats and given the nature of the letters, one would expect to see an arrival mark. So why is it normally missing?

My theory is this. When the very numerous money letters arrived in Odessa, they were sorted according to their final destinations, of which there were in reality only four likely ones. So a bag would be created for St Andrew, another for St John, and so on. Then the bags would be sealed and would arrive sealed in Athos where the ROPIT post office would simply hand them over to monks from the monasteries whose job it was to collect their mail. The very small number of letters with ROPIT AFON arrival marks would have been those put in a late bag, unsorted, or put into it because they had unclear addresses. In addition, some may have been later handed back to the ROPIT office on Athos by monastery monks because they had been mis-sorted in Odessa.

The system of making up the bags in Odessa may help explain why the routing “via Odessa” appears to be obligatory. But there may be another reason:

Second theory: a lot of money got sent to Mont Athos in the sixty years from the 1840s to 1914. It was always accompanied by some kind of letter indicating what the money was for: prayers, candles, and so on. But on Athos itself the money was fairly useless. The monks had to import most of what they needed for both secular and religious purposes. They grew some food locally and had pharmacies, printing presses, candle making factories, and even photographic studios - but all the equipment and raw material had to be imported:  from Odessa, from Taganrog, from Kerch, from Constantinople. That generated a very large number of bills to be paid.

In the March 2020 Heinrich Koehler Wiesbaden auction, many hundreds of invoices addressed to Mont Athos will be included in the sale of a large collection of Athos material. How were those invoices paid? There are several possibilities: monks went down to the port of Daphne with a sack of money and paid the captain of the boat which was making a delivery; monks travelled to Odessa and so on with cash in a bag and went around paying bills; the monks sent money letters out from Mont Athos to all the firms to which they owed money. And so on.

There is another possibility. The money letters were opened in the Odessa post office and the money removed, under the supervision of local agents of the Athos monasteries. The money was then banked locally and bills were settled via the banking system or by monks who came to Odessa and  took money from the bank there and then went around paying bills. The amount of money removed was carefully noted and the money letter envelopes were sent on to Athos with the letters inside which indicated the uses for which the money was intended: the prayers and candles and so on. Other material in the Koehler auction indicates that the monasteries were involved in major use of the banking system in Odessa and Constantinople. Someone may be able to test my very speculative theory by piecing together the history. An obvious alternative theory would say that the money really did go to Athos and that monks there were then tasked with taking it off Athos to Odessa and Constantinople and banking it there for future use in paying bills.


The following excerpt is from the official government newspaper Pravitelstvenny Vestnik.

Issue of 13 August 1894: According to the old ROPiT treaty of 1872, money and declared value packets addressed to Afon were opened at the Odessa post office, and the enclosed money was handed over to a ROPiT agent for transmission to Afon by ROPiT ship. The addressee had to pay a fee on delivery. According to the new ROPiT treaty effective 1 Sept. 1894, all fees will be collected when the mail is posted and no mail will be opened.
Posted by Trevor Pateman at 03:15 No comments: 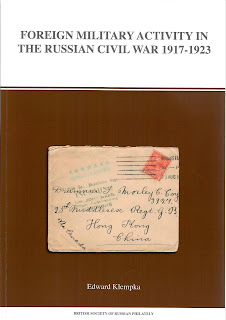 This impressive 380 page, full colour book is jointly published by the auction house David Feldman (Geneva) and the British Society of Russian Philately. The well-known collector, Edward Klempka, illustrates material from more foreign forces  than most of us supposed existed. So we not only have the Americans and the British, the French and the Germans but also Italians and  Poles,  Turks and Yugoslavs. And ten more in addition.The profuse illustrations include many of rare and unexpected items. Any collector who is puzzled over an item which looks as if it might have to do with some foreign intervention in Russia could turn to this book and expect enlightenment.

The book has an ISBN and on the website of bsrp.org is priced at £50 plus postage. For more information follow the link:

Posted by Trevor Pateman at 06:10 No comments: