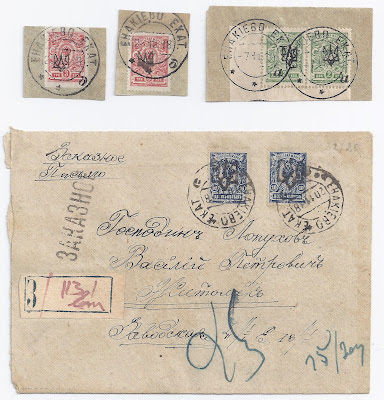 Most Trident collectors will be familiar with the cancellation of ENAKIEVO EKAT on covers or, more often, small pieces with Trident overprinted stamps - normally those of Katerynoslav but sometimes from other Districts. At the end of 1918, the Enakievo post office was quite a Philatelic Bureau. At the top, I show three fragments with two different Enakievo cancellations.

I was amused when I came across the cover also shown above. Here the stamps (Podillia Ia) appear to be genuine, but the cancellation is a forgery. So is the improvised Registration label and the "ZAKAZNOE" cachet. On the reverse is a ZHITOMIR receiver cancellation which is in the same shaky style and in the same watery ink.

No need to Beware! surely? Nonetheless, at some point an optimistic dealer pencilled $70 on the back.

Postscript 07 April: After posting this Blog, I found this genuine Enakievo cover with the same date 20 11 18 and same cancellation serial as on the forgery and a ZAKAZNOE cachet which looks as if it has been copied for the fake though it is here applied in violet not black. The 10 kopeck stamp on this cover is a rarity: it has a Katerynoslav II overprint (Bulat 824c, - - ) 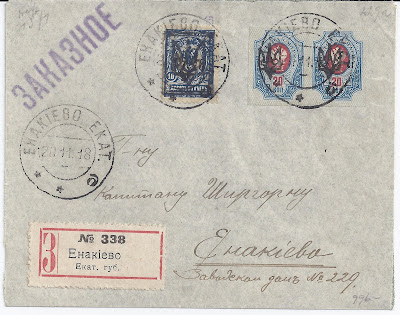