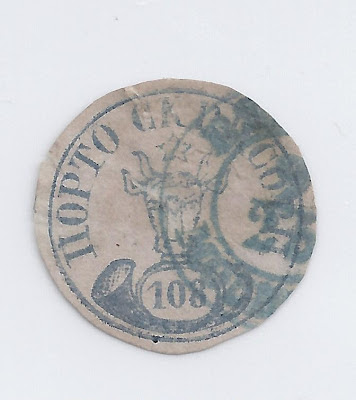 I have never had a first issue Bulls Head before. And I don't think I have ever before had a stamp with a catalogue value of 10000 €uro (Michel). It's genuine.

Actually, it is a much more common stamp than many of the stamps of Ukraine and Armenia that I handle but which have catalogue values a fraction of the Bulls Heads.

In his very big book on the Bulls Heads, Die Ochsenköpfe der Moldau, Fritz Heimbüchler records no less than 177 used copies of the 108 Parale, over half of them used at Jassy.

My stamp is in poor condition though it looks quite good from the front. I have spent some time trying to figure out the postmark. It could be BAKEU, BERLAD or BOTUSCHANI.

Now at Bakeu, they cut the stamps round and my stamp is cut round ... Heimbüchler records just two copies of the 108 Parale used at Bakeu.

At Berlad, the dates slugs are often reversed with the month at top and day at bottom. My stamp shows this. But Heimbüchler says that they also did this at Bakeu. He records 9 copies of the 108 Parale used at Berlad.

He records two copies used at Botuschani. All three offices with names beginning with "B" cancelled in blue ink so this one could have been used there.

I am inclined to the view that the cancel is BERLAD. Heimbüchler illustrates over-inked examples of this cancellation like the one on my stamp. But if it is Berlad, then the stamp has probably been cut round by some past philatelist - they did things like that :(

It would be nice if it was Bakeu, in which case you would expect it to be cut round.

The stamp is for sale.
Posted by trevor pateman at 04:19