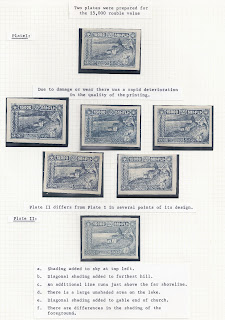 This page from the collection of the late Stephen Hornby nicely illustrates the two Plates made for the 15 000 rouble value of the First Yessayan / Essayan pictorials, lithographed in Constantinople  at the V.M. Yessayan Printing Works for the new government of Soviet Armenia.

Though this value was never issued - perhaps because it showed a church - Yessayan did not know this when he was printing the stamps. The fact that he made a new Plate to replace an unsatisfactory first Plate shows simply that he took this contract seriously and wanted to produce good work.

We know that the designer of these stamps, Sarkis Khachaturian, visited Constantinople in 1921 as a representative of the Armenian government (see my Blog about 1921  First Star overprints). We do not know how long he stayed and we do not know if he involved himself in the production of the stamps. But if he stayed long enough, he could certainly have got involved in the production and taken responsibility for redesigning this stamp.