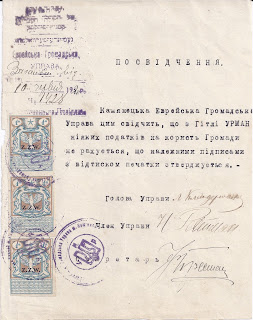 Back on 24 September 2011 I showed a cover from Dr Seichter's collection with a Cyrillic but Polish-derived cancellation [ KAMIENIEC] for Kamenetz  Podolsk dated May 1920. I had no other examples to compare it with.

Now I show a document dated 10 June 1920. This was prepared by the Executive of the Jewish Community, using a bi-lingual handstamp top left. It is franked with three Polish fiscal stamps, with the "Z.Z.W." overprint applied to those used in the East. But these stamps are cancelled with a seal of the same Jewish Community Executive - and incorporating a Ukrainian Trident.

The document attests to the tax status of one Gitli [Hitli] Urman in relation to the Jewish Community.

It's a most interesting - and I guess, rare - document which shows that the Polish occupiers had at least some kind of civil administration in Ukraine - enough to put fiscal stamps into the hands of a local organisation.

In the first line of the POSVIDCHENNYA ,  you will see the word KAMYANETSKA. The third letter is the Cyrillic reversed "R" which is transliterated as "YA" or "IA". This is the Ukrainian spelling of [Russian] KAMENETZ. Now, there is a cancellation which is supposed to be a fake, identified on the basis of its "YA",  yielding KAMYANETZ - POD or KAMIANETS - POD : 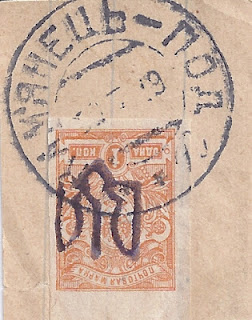 The stamps cancelled with this postmark (always philatelically) are often late prints or fakes. But it is I suppose conceivable that the cancellation is genuine and thus a rare example of a Ukrainian-language cancellation from the 1918 -20 period. But I would want to see it used on a Money Transfer Form before accepting that conclusion.