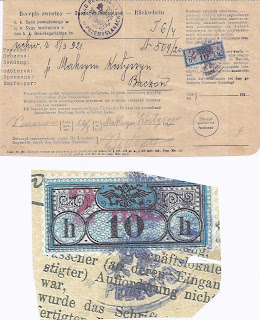 I just noticed an anomaly in the Michel catalogue:

Under Austria, Michel lists the special stamps issued for the Court Delivery service which developed in Galicia - supposedly to overcome the inefficiencies of the regular K u K  postal service: people would receive their Summons to attend Court after the date of the Court hearing, and so on. Michel lists three basic stamps issued between 1898 and 1908.

This local Court Delivery system survived the end of the Austrian Empire and Poland issued special stamps for Galicia. But these are to be found in catalogues of Revenue stamps. Michel does not list them. But if they were postage stamps during the Austrian period, surely they were also postage stamps in the Polish period?

That this may be the right way to look at things is supported by the fact that the first Polish Court Delivery stamps were the old Austrian stamps, used with manuscript or handstamped revaluations. Above I show the old 10 heller stamp revalued in red to 2 Marks with a handstamp and used at Przemysl in 1920 and /or 1921 (see the annotation 509 / 20 to the left of the stamp and the note top left 8 / 3 921)

This stamp is scarce as are the Manuscript revaluations to 2 Marks.
Posted by trevor pateman at 09:09