A Puzzling Trident from Odessa 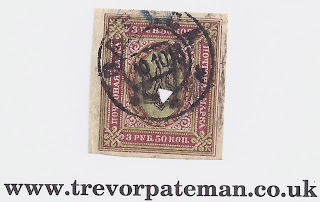 The Type 1 Trident overprint of Odessa was printed from a lithographic plate of 10 x 10, designed for Imperial kopeck value stamps.

It is therefore rather strange that John Bulat lists Type 1 on two rouble values - the 10 x 10 plate would simply not work applied to rouble value sheets. But Bulat has the following:

I can only illustrate one example of these stamps; I did not make a note of where I got it from, but it is probably from the Schmidt collection. There are no markings or signatures on the back of the stamp but nearly everything looks plausible:

- the stamp appears to have been postally used on a formular card and has a triangular punch hole and a trace of blue crayon
- the ODESSA 10 10 18 cancel looks good - the only doubtful element is the difference in style between the first "10" (which looks slightly doubled ) and the second "10" but this may be of no significance
- the Trident looks good too. It's in the right kind of ink and it's under the cancellation.

BUT if this is Odessa Type 1 then really only two possibilities exist:

Can anyone show more examples of this stamp or find references in the philatelic literature? Do any multiples exist?