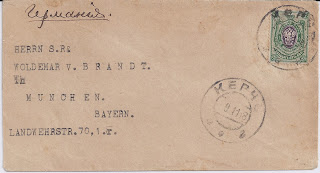 I sometimes forget just how extensive was  the German Occupation of former Imperial Russia after the Treaty of Brest Litovsk. It is worth Googling and looking at the map!

Here for example is an ordinary business letter from the port of KERCH on the extreme eastern tip of the Crimean peninsula, but occupied by Germany in 1918 after the Treaty of Brest-Litovsk. It was posted there on 9 11 18 just two days before the general Armistice of 11 11 18 and despite all the military and political upheavals, appears to have arrived in Munich. Though the cachet on the reverse - the number 499 in circle - does not tell us when,  I think it is a regular Munich distribution mark, not a censor cachet which could have been applied anywhere along the route.

Though the address is typed in German, "Germany" is written in Cyrillic at the top left.

It's the Tariff of 25 kopecks which made me look twice at this apparently unremarkable letter. But if the port had been under the control of the Ukrainian National republic at this time, I would expect the stamp to have a Trident overprint - tolerance of unoverprinted stamps ended in October. So who was in charge of the civilian postal service at this date?

The cancellation is one which continues in use during the Civil War - I have seen it on Denikin stamps.