Russia was at war with Austria-Hungary until the Bolsheviks called a halt to their side's hostilities and eventually signed the Treaty of Brest-Litovsk with the Central Powers in March 1918. Back in 1915, the Russians had enjoyed one of their few successes of the war in Austro-Hungarian Galicia and the campaign there had harvested a very large number of Austro-Hungarian Prisoners of War most of whom ended up being sent in the general direction of Siberia.

Normally, you expect Prisoners of the 1914 - 18 War to communicate by means of stampless, free post cards and Austro-Hungarian prisoners did, But at some point they - or some of them - gained access to the civilian mail system. This occurred even before the end of hostilities.

The card below, for example, dates from the period of the Provisional Government. Cancelled at Slobodskoi 3 July 1917 it is correctly franked at the regular foreign postcard rate of 4 kopecks. At the top it is identified as POW correspondence in both German and Russian. It was censored in Petrograd with two violet cachets and on arrival in Vienna with a typical red triangular cachet applied at top right over the stamps. Helpfully, the recipient has noted bottom right in pencil that he received the card on 14 January 1918. 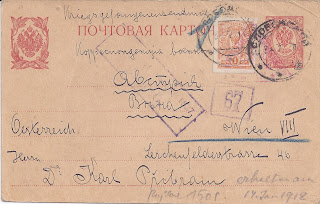 
The card, written in German, begins by saying that the writer has received 50 roubles through the Stockholm Handelsbank and thanks his correspondent for the money.

The handwriting and the status of the recipient (Dr Karl Pribram) suggests that the sender - who does not spell out his full name or address - is an Officer and sending cards like this (and receiving money transfers) may be Officer privileges.

A bit more surprising is to find a franked letter from the period of the Provisional Government. Franked at 15 kopecks, this was sent from what looks like Makeevka / Makievka in the Don Cossack Oblast on 4 October 1917 and transited through Moscow on 29 December 1917 (there is a roller cancel on reverse) where it was censored with a typical small circular violet cachet (front middle towards the bottom). The letter was censored on arrival in Vienna with the prominent red triangle cachet and, helpfully again, the recipient has noted bottom right that the letter was received 29 October 1918 - over a year after its despatch. The letter is bi-lingually addressed and at the top the sender gives his name, number and what looks like a factory address all in Cyrillic. 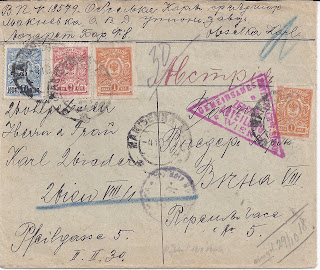 The next card dates from the period of the Armistice between Russia and the Central Powers. This was posted on 29 January 1918 - a couple of days before the Calendar change - at St. Duplesnskaya on the Sibereian Railway and franked at the 5 kopeck internal postcard rate. There are no markings indicating either transit or arrival: 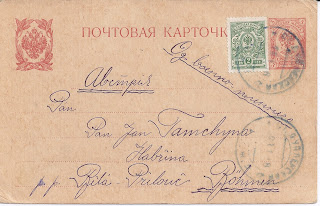 
Then there is a pause - as the Central Powers renew hostilities at the end of February - until there is a flurry of activity from March through May 1918 after the Treaty of Brest-Litovsk. I have ten cards, nine of which went out westwards through Moscow or Petrograd and one of which (probably as a result of the Chelyabinsk Incident) though intended to go out West (with an RSFSR tariff franking of 20 kopecks) ended up going out East, receiving what I take to be American censorship presumably in Vladivostok. These cards can be described as follows:

From Turansk 24 3 18 franked 25 kopecks with a further missing stamp (which could have been a 15 kopeck to take this to 40 kopecks), addressed to Vienna, no transits, censors or receivers but pencil manuscript indicating arrival 26 November 1918

From Bocharevo Voksal 19 4 18 franked 20 kopecks, sent to a small town in Austria,  the sender giving his address as "auf der Reise in die Heimat" - on the journey home. No transits or censors or arrival marks

From Cheliabinsk Voksal 21 4 18, a picture postcard of Cheliabinsk, addressed to Prague franked 40 kopecks, no transits but Vienna red triangle censors

From Petropavlovsk Privoksal Akmolinsk 23 4 18 franked 20 kopecks addressed to Moravia, no transits or censors or arrival marks 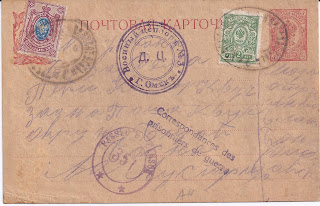 From Petrograd 31 5 18 (picture postcard of the city) franked 40 kopecks, Petrograd censor, Vienna red triangle censor, pencil Mss for arrival 30 August 1918. The sender writes cheerfully that he is on the way to the border and will telegraph from the Quarantine Station there. 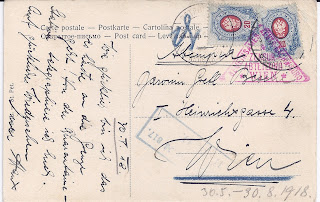 
One of the puzzles with this group is the sense it conveys of two tariffs operating - the 20 kopeck RSFSR Inland postcard rate and a 40 kopeck tariff.

Then there is a gap in my collection until I come to the only item which looks like regular post-Brest Litovsk mail, an ordinary letter sent from Petrograd on 14 October 1918 addressed to Vienna, franked at the 30 kopecks one expects for ordinary letters sent under the Brest-Litovsk arrangements, censored in Petrograd, routed through Königsberg with a boxed German censor but with no arrival marks. This is a late date for any foreign mail from Russia in 1918 - though foreign  mail services were not officially discontinued until 1 January 1919, they had come to a nearly complete stop before then. 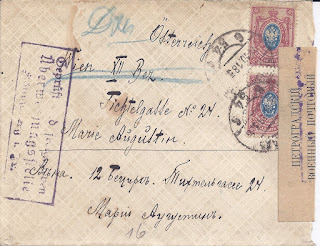 Added 30 June 2015: Alexander Epstein provides this second example of an English-language "Passed by Censor" cachet on an outgoing card, this one franked at an anomalous 18 kopecks [ the Tariff was 12 kopecks but that is rarely seen, most senders or postal clerks opting for the Inland tariff of 20 kopecks or something higher up to as much as 40 kopecks as shown above]: 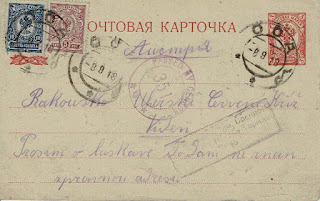 Labels: Austria Hungary prisoner of war russia mail, K u K prisoners of war in Russia 1915 to 1918, mail after treaty of brest litovsk, mail from Russia to Austria 1917 1918