Earliest Known Use of Ukraine Tridents ... Can You Improve on This One? 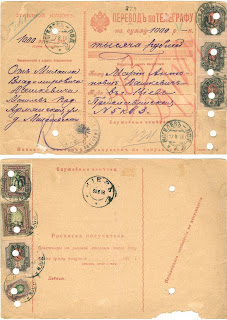 Roman Procyk in the USA has kindly allowed me to publish here the Telegraphic Money Transfer Form above. It shows the earliest known use of  Ukraine trident overprinted stamps at MOGILEV-POD 27 8 18 arriving in KIEV 30 8 18. The stamps are  overprinted with Podillia Type VIIIa

Can anyone come up with an earlier date?  It does seem likely that the Podillia Tridents were the first to be introduced anywhere in Ukraine - and with little or no philatelic manipulation in the early phase of their production, distribution and use.

Claims to beat the 27 August date can be posted here if you send me a good quality scan (email me at trevor@trevorpateman.co.uk). I have to reserve the right to decline (with an explanation) obvious fakes or dubious philatelic items. I am hoping for something as good as this Telegraphic Money Transfer Form! ( I will not be able to respond until 20 September - I will be away from my computer for a week).

Added 20 September: Roman Procyk has now added from his own collection this loose stamp used at NEMIROV on 24 8 18. I would prefer to see a cover or MTF with receiver cancels to help rule out slipped dates, but the example is plausible: it is a perforated high value and these are normally seen with early dates. The stamp is signed Bulat and the Trident type is VIIIb: 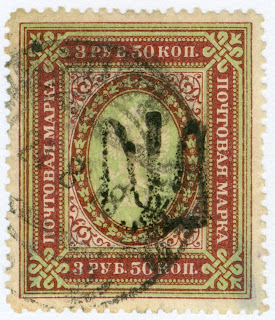 Added 22 September 2015: Oleg Matveev in Ukraine sends me scans of two parcel cards with Trident stamps cancelled 13 August 1918. Both look to me completely genuine. One has Poltava Tridents and is sent  from POLTAVA 13 8 18 with receiver cancellation of ROSTOV DON 2 9 18. The other is from DZHURIN POD 13 8 18 [the blue ink typical for this post office] with receiver cancellation of TAGANROG 1 (?) 9 18

I think it will be difficult to improve on these items. Even if there is a date slip from 23 8 18 to 13 8 18 that would still be a day earlier than the previous example posted here ...

It is now important to find some items sent between the 13 August (the Oleg Mateev items) and the 24 and 27 August of the Roman Procyk items. This will add to the plausibility of the items we already have and may also show more Trident types used at an early date. So far we have Podillia VIIIa, VIIIb, XIIb, and Poltava I (and on the 3r50 it could be Poltava II but I cannot see enough detail). 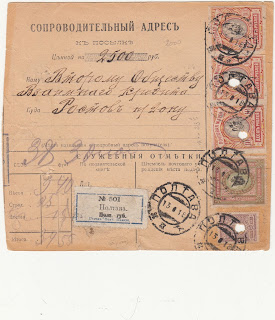 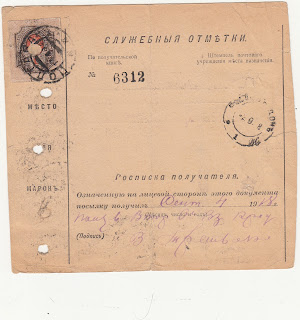 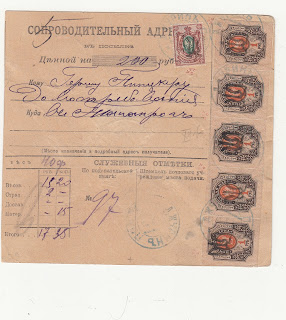 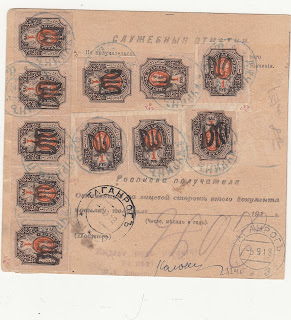 Added 23 September 2015: Roman Procyk provides confirmation of August use of Poltava Tridents with these examples of 3r 50 perforated stamps with Poltava type I cancelled at NOVYI ORLYK POLT.  22 8 18 (ignore the 20 kopeck stamp for now):