Here is one of those rare things, a Northern Army OKCA cover which appears to have travelled through the post: 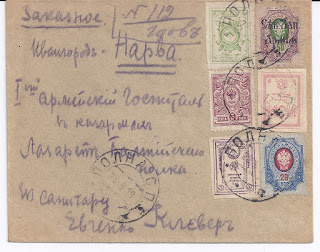 A photo of this cover was published in 1991 by Dr R J Ceresa in vol 3, Parts 19 / 21 of his The Postage Stamps of Russia 1917 - 1923 handbooks. He gives its provenance as the collection of a Herr Muller (not Müller - see Ivo Steijn's Comment below). Now it looks at least semi-philatelic but the important question (at this point) is whether it did go through the post.

At the top is a Manuscript registration cachet "N 112 Gdov" in a different pencil and handwriting from that which produced the address. The address is an army hospital in Ivangorod - Narva and the addressee is named Klever and is identified as a hospital or medical orderly. The stamps are cancelled POLNA SPB 28 9 19 and we know (thanks to Alexander Epstein) that this canceller was in use at Gdov at this time.

On the back is the name and address of the sender, another Klever, but in a different pencil and handwriting. It links the sender to the Northern Army.The letter has been roughly opened - but in such a way as to create in my mind the suspicion that there was nothing in the envelope.

Most importantly, the cover has a new style Estonian cancellation for NARWA "a" 1 10 1919, perfectly genuine ... BUT not quite enough to rule out this possibility, that Klever carried this letter himself to Narva and got it backstamped there. There are no Registry markings which one could link to Narva.

However, on the same day Klever sent another letter with Registry number "N 117 Gdov", this time addressed to the well-known stamp dealers and catalogue makers Senf in Leipzig. This cover is illustrated in poor quality by Dr Ceresa and not in my possession, so I cannot improve on it: 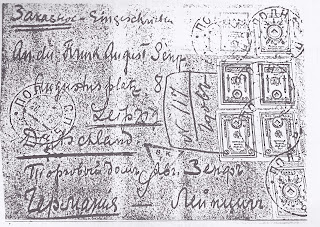 This cover has an Estonian censor triangle on the front and a LEIPZIG receiver on the reverse. This cover surely did go through the post, suggesting that the previous one did too - unless Klever carried them both to Narva. But if he had done that, even the most co-operative post office would probably have backstamped the Leipzig letter with a NARWA cancellation in order to indicate the transit. This cover also has Klever's pencilled address on the back but again in a different handwriting and pencil.

The fact that Klever was writing to Senf indicates a clear philatelic motivation, most likely informing them of the existence of this stamp issue. It is in fact good news for the authenticity of this issue that someone was doing this from the right place and at more or less the right time.

It would be good to know who Klever was. The point of this analysis, however, is to argue that the likelihood that the first cover travelled through the post to Narva is increased by the near-certainty that this second cover travelled through the post to Leipzig. What would really help the analysis along would be to have the covers in between Gdov 112 and 117 and on either side of those numbers. How many letters did Klever send on that day? Who else used the post office that day?