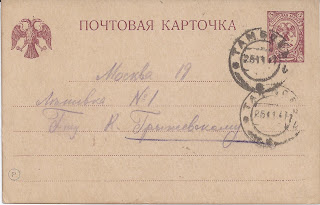 This is my August Competition.

Here's an ordinary 5 kopeck Kerensky (Provisonal Government) Postal Stationery card correctly used from TAMBOV 25 11 17 to Moscow. So it is used a month after the October (Bolshevik) Revolution. On the back the sender has dated their message to 25/XI so we can rely on the postmark.

The Competition is simple: Send me a scan of a Kerensky card showing an earlier date of use. No prizes, except publication here with your name. Scans can be sent to trevor@trevorpateman.co.uk

August 10 2016 and Ivo Steijn in the USA sends these examples from the Robert Taylor collection, giving us 9 11 17 also from TAMBOV to Moscow and 15 11 17 from PETROGRAD to Koebenhavn, uprated to the foreign 8 kopeck rate. Thanks, Ivo! So now the challenge is to beat 9 November (Old Style). 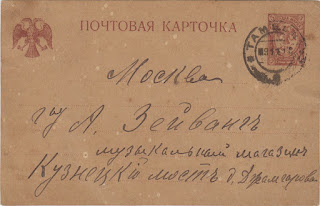 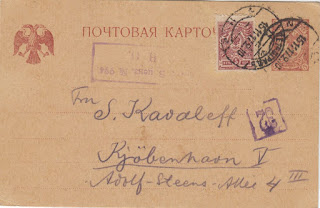 August 10 2016 and Alexander Epstein in Estonia shows us three examples, top to bottom

So..... just one day earlier than 25 October 1917 and we will have a Kerensky card used in the Kerensky [Provisional Government ] period.  Who has it in their collection? 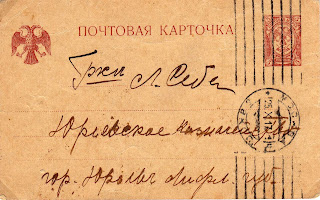 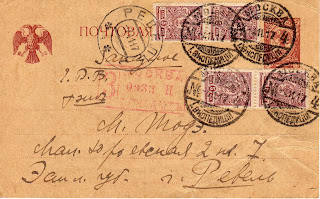 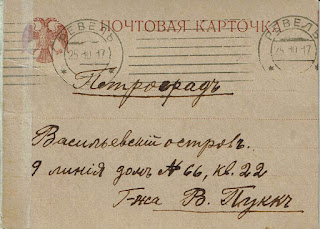 Added 3 October 2016: Ahto Tanner sends me the card below used at REVAL 27 10 17. Alexander Epstein's card immediately above this was used at REVAL 25 10 17 - so it looks like there was a stock available in the post office there, sent out from Petrograd during the Kerensky period. So somewhere there must be a card used on Tuesday 24 October or Monday 23 October .... 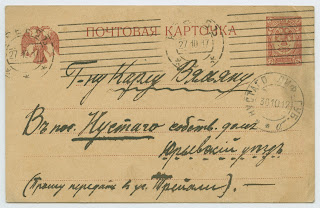 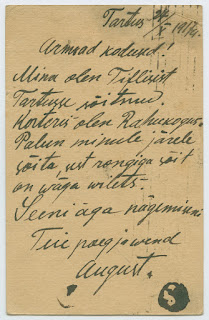 Added 27 August: Henri Taparel submits this interesting card used from IRKUTSK at the end of November, with a transit censor mark of Petrograd on the reverse. The use of the Kerensky card for foreign mail is unusual at this early period, partly because the foreign postcard tariff was 8 kopecks - this card is under-franked and has a Tax "T" marking and a "15 c" charge in violet crayon. The oval French censor mark shows that it arrived in France. 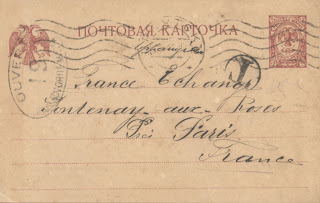