Was there a Kopaihorod Local Trident? 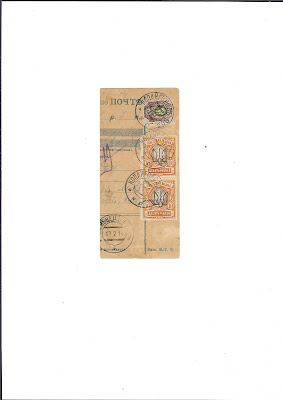 When I first looked at this item, I thought it was some kind of fake. Podilia Tridents do not look like these neat and crisp overprints. These overprints resemble type Ia, but on the 50 kopeck imperforate type Ia is very scarce and on the 10 rouble it is a rarity which Bulat does not think exists in used condition.

Bulat does not list a local Trident for Kopaihorod or illustrate any type which looks like these overprints. They are not Popoff / Popov types, for example.

The fragment is cancelled KOPAIGOROD 15 2 19 and there is a KAMENETS receiver for 19 2 19. Both cancellations look genuine and the tridents appear to be under the despatch cancel. There is nothing on the back apart from hinge remainders and part of a Kamenets cancel which has the beginnings of a date which does not fit well ".4 1." when you would expect a 2 or 3 for February or March. There is a Manuscript 17 / IX which again is odd - maybe the transfer did not go through (the signature space has been clipped so it's unclear)

A thought occurred to me. This fragment is dated in the sixth month of Trident use. Someone has worked out that the 50 kop imperforate and 10 rouble perforate are rare with Type Ia and they have created these stamps with fake overprints.

But then there is a problem with that idea. Once you have put stamps onto a Money Transfer Form, how do you get them back? The MTF goes into the archives until such time as it is thrown out, stolen or sold off. A postal clerk in Kopaihorod would at least need an accomplice in Kamenets to get the stamps back ...

And where are the mint examples you would expect from a philatelic scam?

Then I was flicking through Dr Ceresa's Special Tridents Handbook. Amazingly, he lists a Kopaihorod local trident on the basis of one MTF fragment in the Mallegni collection. The Trident is applied on 1, 2 and 5 kop imperforates. The MTF despatch cancel is dated 21 2 19 - less than a week away from my fragment. There is a poor reproduction of the fragment on Plate CDXXXVIII of the Handbook.

I still felt I was dealing with some kind of scam - Podilia Ia on the 2 kop imperforate is also a scarce stamp - so I went onto the Internet. In 2007, Fusco Auctions sold an MTF fragment cancelled KOPAIGOROD 5 2 19 partly franked with a 1 rouble stamp which looks as if it has this Trident overprint ...

Case proven? I am still not sure. There was philatelic activity in the Kopaihorod post office - one comes across stamps CTO on piece from this office. Maybe some philatelist presented the Post Office with a swanky handstamp to use on unoverprinted stamps in their stock. Who knows. Any better ideas?