Below, is a pane of 25 of Katerynoslav type I overprints from a 5-cliche handstamp. In row 4, a weak impression in Position 1 has been corrected by reapplication of the handstamp - but shifted to the left so that it is Position 5 of the handstamp which makes the correction, not Position 1. Positions 4 and 3 appear in the sheet margin (reading right to left): 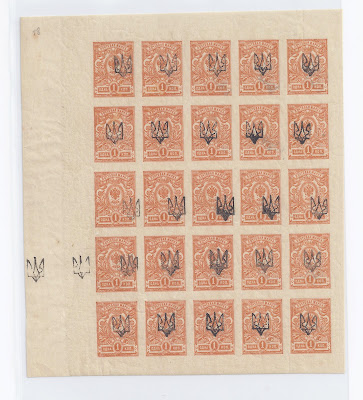 In contrast, here is a block of Kharkiv I (handstamp 9). This handstamp is also a 5 -cliche handstamp. The weak impression in Row 1 has been corrected by re-applying the whole handsdtamp, thus producing a double print: 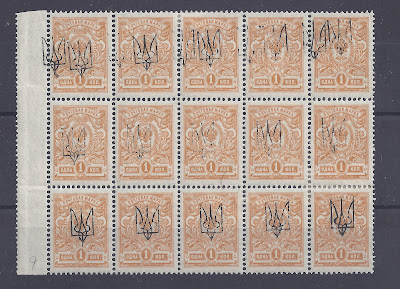 Finally, and more interesting, when part of a 5 - handstamp impression fails to print, corrections can be made with single handstamps kept for the purpose. I believe this can be found for both Katerynoslav and Kharkiv. The pane below dramatically illustrates what is involved because the correction in Row 3 Position 5 is in a different colour (red). By looking up and down the column of position 5s, it can be seen that the red handstamp is not reapplication of position 5, nor (looking across the Rows) is it one of the other positions from the handstamp. It is a separate single handstamp. The work has been carelessly done, because the weak impression in Row 4 Position 5 has not been corrected. John Bulat has pencilled on this block that it is a Late Print from Handstamp 9 but he has not commented on the red overprint, nor have I seen it listed or discussed anywhere (and it is not from the rare handstamp used to make the red overprints Bulat 725-727): 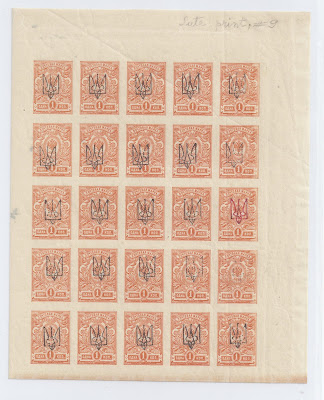