Azerbaijan: Imperforate Stamps from the 1990s 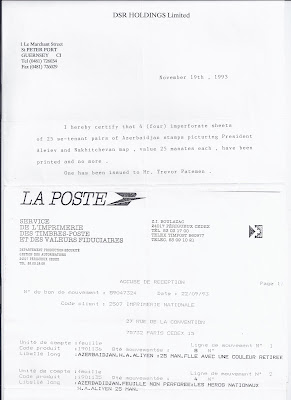 When the Soviet Union disintegrated, a large number of state and private printing companies, along with philatelic agencies, offered to print and distribute postage stamps and banknotes for the New Republics. Many of the Republics did not have adequate production facilities: Lithuania, for example, produced its first stamps in imperforate form simply because adequate perforating machinery was not available. The first perforated stamps were printed in (east) Germany.

Azerbaijan contracted production of some of its first stamps to a company called "DSR Holdings Ltd" based in Jersey. This company had some connection to France's La Poste - it may have been a subsidiary - and Azerbaijan's stamps were printed at La Poste's printing works.

Both France and Monaco (for whom La Poste traditionally produces stamps) officially prepare imperforate stamps for sale to collectors - this subsidises the production costs for regular stamps. DSR did the same for Azerbaijan - but the Azerbaijan postal administration did not at first know that imperforates were being produced and sold. None were sent to Azerbaijan. Later, the situation was (I believe) regularised with some imperforates being sent to Baku.

Above I show the letter I received to accompany my sheet of Aliyev stamps and the supporting documentation in the form of a print record from La Poste's printing works. Note that as well as imperforates, stamps with missing colours were also printed.

I have no reason to believe that the print run figures I was given were false. There were 100 Aliyev imperforates (in four sheets of 25) and the later issues were, I recall, in editions of 300. Occasionally, you see these scarce items for sale. Some of them will have originated in my stock.

With the passage of time, I think one can see this little episode as part of the "Wild East" period of post-Soviet history, when all kinds of adventurers and speculators were trying to make money. Whether anyone actually made a fortune out of post-Soviet stamp issues is another question ...
Posted by trevor pateman at 02:31