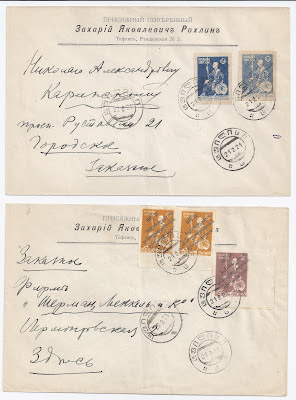 Here are two covers: both use pre-printed business envelopes of a member of the Rockling family in Tiflis, both are franked with genuine examples of "De Jure" overprints intended to mark the full recognition of Georgia by the League of Nations on 27 January 1921, both are addressed in the same hand and marked "Registered" in the same hand, to no obvious purpose since there are no Registration cachets or numbers. Both have identical cancellations:

Now, the only real question of interest is this: were these covers favour cancelled at a Tbilisi post office counter, just before the Bolshevik capture of Tbilisi on 25 February, or not? And, if not, where were they cancelled.

Peter Ashford in his Georgia: Postal Cancellations 1918 - 1923 lists the first "ts" cancellation as genuine type, gives it the number Type 26A but says of it, "So far only seen dated 21.2.21 on philatelic covers bearing top values of "De Jure" issue, cancelled for friends of S.Rockling. Confirmation of other usage awaited" (page 68).

However, Ashford then lists the "z" cancellation as a Fake, a forgery (page 151) used by the 1920 - 21 "Constantinople" group of stamp dealers, collectors, printers and crooks - of which more in a moment. This "z" cancellation, says Ashford, was "used to 'cancel' a whole range of phantasies" (page 151)

In my opinion, it is more probable that either both these cancellations are genuine or that both are fake.

Of course, it could be that they are genuine post-office made cancellers which, along with an ink pad, found their way to the other side of the post office counter and thence to a Forger's Den in Constantinople.

It could also be that they were made privately in Tbilisi for someone who knew he was going to (have to) leave and wanted them to take with him, to Constantinople.

Given their quality, it seems less likely that they were made in Constantinople.

Crucially, unless we can find examples of BOTH of them used on uninteresting mail before or after 21/22 2 21 it seems unlikely that they were at the post office counter in Tbilisi on JUST those two days. It seems more likely that they were never there and that, wherever they were made, they were only used in Constantinople to create what French dealers now like to call produits philatéliques.

I probably would not have put you through this analysis but for one thing: on the first cover illustrated above (blue stamps) on the right towards the bottom, is the house mark of ROMEKO PARIS.

Now Serge Romeko's original name was Rockling and these covers are on his family's business notepaper. As a Paris stamp dealer, Romeko was remarkably careful about applying his house mark. I have only once or twice seen it on a "bad" item. In adddition, I have many times seen sheets or blocks of stamps from Transcaucasia annotated in pencil by Romeko with the word "Bon" and his initials - it seems that he checked stuff coming into his stock and used this pencilled note to indicate that he was satisfied with the item. So I would be surprised if Romeko put his house mark on a fake, even one he had made himself as a younger man, en route to Paris from Tbilisi via Constantinople ...

Which brings me to the "Constantinople Group", the subject of my next Post.
Posted by trevor pateman at 06:29