I promise that this is the third and last Blog in this short series on Local Tridents. And I warn you that you may need a strong coffee (or something even stronger) to get through to the end ... [ But the good news is that this Blog has been corrected on 19 October 2012 and now makes more sense :)]

You know there are going to be problems about Lubashivka when you try to spell it. Dr Seichter tries both LUBASCHEWKA and LJUBASCHEWKA. Dr Ceresa sticks with LIUBASHIVKA and John Bulat with LUBASHIVKA. I follow Bulat here but reckon that the Imperial postmark would have read LIUBASHEVKA (this is what I transliterate from the late Gary Combs' Imperial postal place names list - I can't reproduce the original Cyrillic here).

Rather more importantly, no one agrees what the Lubashivka Trident looks like: 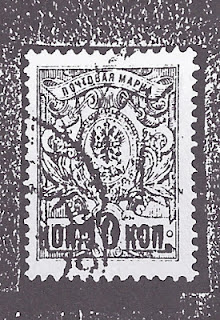 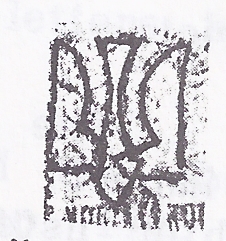 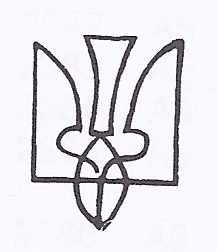 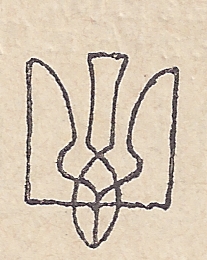 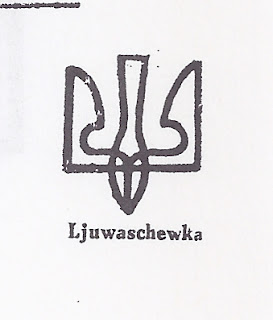 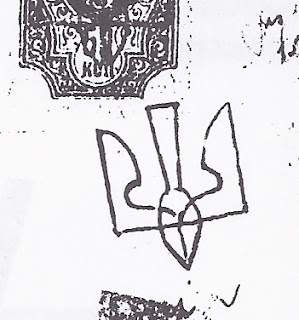 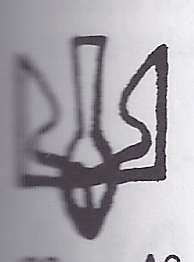 At the top Dr Seichter shows us a stamp, or rather a photograph of a stamp, which is reproduced in Dr Ceresa's publication on the Special Trident Issues (Plate CDXCIX). Underneath is Dr Ceresa's enhanced copy of this photograph - he has drawn in the lines of the trident so we can see them. Next comes John Bulat's design (page 128 of his Handbook) followed by Svenson's 1932/5 catalogue illustration. Then there is a random illustration which Dr Seichter has on his album page. Then comes a Seichter drawing based on another stamp. Finally, there is John Bulat's illustration for an "Unknown" type at page 137 of his book.

Well, even a casual glance should indicate that our authors are not in agreement. Does the central spike balance on the top of the base cap with a horizontal line (Bulat's first illustration) or is it pinched in (Svenson's illustration) or is the space between base cap and spike open? These are major differences!

On this question, Forgers also disagree but the majority opt for Svenson's pinched line:

What - if anything - is the truth? Well, the 10/7 kopeck used stamp of which Dr Seichter has a photograph turned up in the Schmidt collection, signed by Dr Seichter. In addition a 15 kopeck imperforate used stamp was linked to it with a note from Seichter and his signature.

When Dr Seichter writes "so eingepäckt nicht möglich zu signieren" - so packed up like this not possible to sign - he means it literally: some of Schmidt's rare stamps were enclosed in tiny cellophane packets which were used before the days of Hawid mounts. They are very difficult to open - I use a scalpel to slit them and take out the stamps and I did this going through Schmidt's collection, keeping the little pieces of paper for future study. But of course Dr Seichter could not sign a stamp packed up in a cellophane bag! So he signed these little slips of paper instead with his official handstamp.

The Trident on the 15 kopeck is unclear. But there is something important that these two stamps have in common and which would lead anyone to group them togethere: the cancellation is the same and it is in the same (and unusual) blue-green ink. And in the case of the 15 kopeck two letters are very clear and they read "...ASH..." just as we should expect if these stamps have anything to do with LubASHivka.

In addition, both the trident overprints appear to be in the same ink and they both appear to be of the same dimensions (they are large tridents as Tridents go).

Go to Bulat page 137 where he has the "Unknown" Trident illustrated last in the display above - and there he lists a 15 kopeck imperforate with violet overprint (Bulat Q4) and comments "The 15 kop has been found with a partial cancellation in green ink which has the same characteristic as the ink used in Lubashivka". Bulat probably got this information from Seichter or Schmidt and it may be that all that has happened over the years is that imperforate got switched to perforate at some point.

But there remains a genuine question: Are these two stamps with characteristic Lubashivka cancellations overprinted with the same Trident or not and, if so, which Trident among the ones I have illustrated?

This time YOU have to do the work. Just click on my image to enlarge it. Comments welcome.

Postscript: The Forgeries are stamps I showed to Ron Zelonka and which he condemned. It may be helpful to see the two 10 / 7 kopeck stamps together: 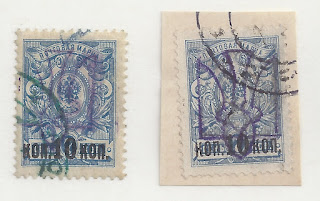 Tobias Huylmans using more advanced methods than I have available gets the Trident image below from the 10/7 kopeck Seichter signed stamp (the stamp on the left just above). It confirms the fan-like top to the spike but leaves some doubt about how the spike joins the base though it rules out the idea of the spike sides smoothly joining the base cap and leaving the middle space open. 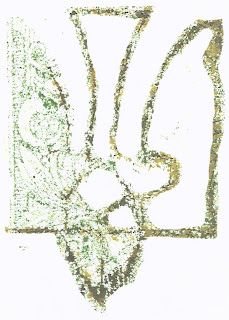