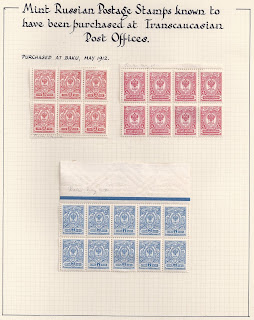 There is a detailed Wikipedia entry for Sir John Ernest Buttery Hotson (1877 - 1944) , a Scottish-educated naturalist and philatelist who spent his career in the Civil Service of British India. But Wikipedia does not tell you that in 1912 he visited Transcaucasia and, among other things, went to the post office in Baku and bought a selection of available stamps, pencilling in the margins "Baku May 1912". The stamps ended up in the collection of Peter Ashford, who was responsible for the album page shown above.

Really, it's only a curiosity - and a pity that he did not visit in another year - maybe May 1922 - when his naturalist's Specimens (beautifully preserved on Ashford's pages and most never hinged!) would probably have been rather more philatelically interesting!