It seems to be a never-ending task to catalogue Ukraine Tridents. None of the catalogues can claim to be complete. Neither Dr Seichter in his Sonder Katalog Ukraine (1968) and John Bulat in his Comprehensive Catalogue of Ukrainain Philately (2003) have a consistent policy for listing varieties like ink colour or inverted overprints. Anyone who begins to collect Kyiv or Poltava, for example, will find many more distinct varieties of ink than the catalogues list.

But it goes beyond that. There are standard overprints to be found on basic stamps which are not listed. And they are not all forgeries. In my stock I have maybe a dozen such stamps, waiting for careful examination.

In my last Blog, I wrote about the handstamp Odessa 6b (Bulat's Odesa 10). Here are a couple of genuine examples which I can use for reference: 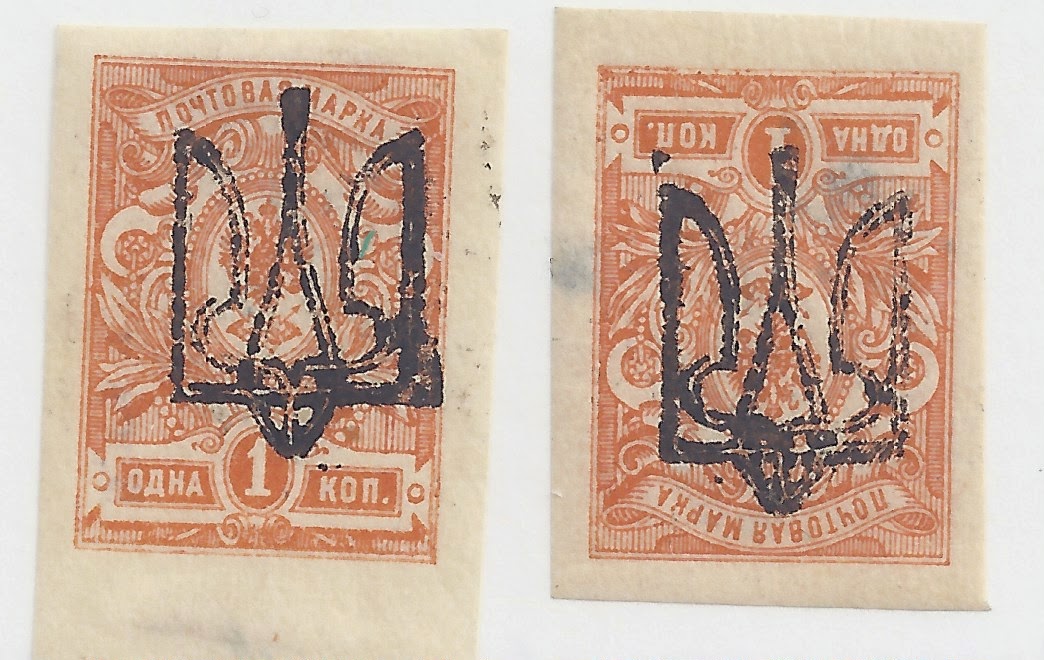 And here are some postally used copies, with low catalogue values, to add a bit more to the picture:

In addition to basic things like the structure of the Trident and the quality of the ink (fairly uniform for this handstamp), I note a few things which seem to repeat. For example, on the right hand side, the space between the inside of the wing notch and the vertical strut usually fills up with ink even when the handstamp is lightly applied. You can see this on the right hand stamp which has been pushed down on more heavily on the left than the right - but the blob of ink joining the right-hand inside and outside is still there. Again, the tip of the spike which extends beyond the wing tips and distinguishes this type from Odessa 6a (Odesa 9) never fails to print - it is always clear and often solidly black at the top as on the left hand stamp. This is maybe surprising since when using handstamps most people (I think!) tend to hit the paper first with the base of the handstamp.

Now we come to the problem stamps: 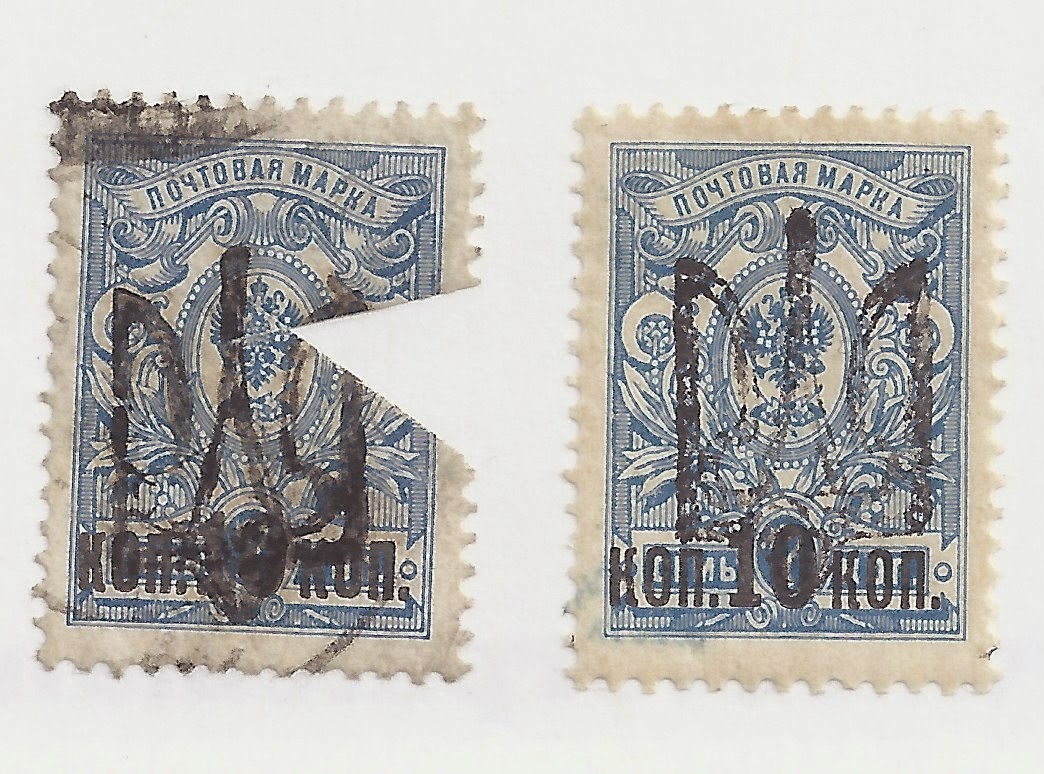 Odessa 6b on the 10/7 kopeck stamp is not listed by either Seichter or Bulat, though they both list 6a on this basic stamp.

Let's start with the left hand stamp. I am sure this shows a genuine Odesa 6b handstamp - it matches my reference copies very well - except that the ink appears more diluted (you can see this if you Click to enlarge the image). The cancellation does not help much - there is nothing legible - but it does seem to be over the overprint and contributes to the diluted ink appearance since it fills in what would otherwise be white spaces. You can see the same thing happening on the 3 rouble 50 stamps above.

The clipped side does help, a lot. This stamp was on a Parcel Card or Money Transfer Form and was clipped before being sent to the archives. No forger would have chosen this stamp to overprint - no one would want to buy it and undamaged 10 / 7 kopeck stamps can be bought for a kopeck or two which people will then buy for a lot of roubles if they are overprinted with Odesa 6b.

The stamp isn't signed but came from the Schmidt collection with a typical pencilled "O" (for Odessa) on the back. A piece of paper had been pasted on the back of the stamp, probably  to stop the cut area getting caught and damaged,  but I have soaked this off.

Now turn to the right hand stamp. When I look at the overprint, it seems a bit bigger than than those on the other stamps and when I measure it is indeed a bit wider: 10.5mm as against 10mm and if we are dealing with a metal handstamp, that is not to be expected. I also have the sense that the right wing curves more smoothly down than on the other stamps. On the other hand, the ink is a very good match with my reference copies. In addition, the top of the spike prints clearly and an infill of ink on the right wing can also be seen. However, I cannot today persuade myself that the overprint is genuine - but if it is a forgery, it is a very good one. Either way, I could sell it much more easily than the clipped stamp! When I turn the stamp over, I find an Odessa dealer-style mark but it's one I don't recognise [ Note added 10 March 2015: Roman Procyk points out that it is a B.Trachtenberg house mark, but with the surname  abridged to "B.TRACHT"; it has previously been recorded and illustrated at www.filatelia.fi ]: 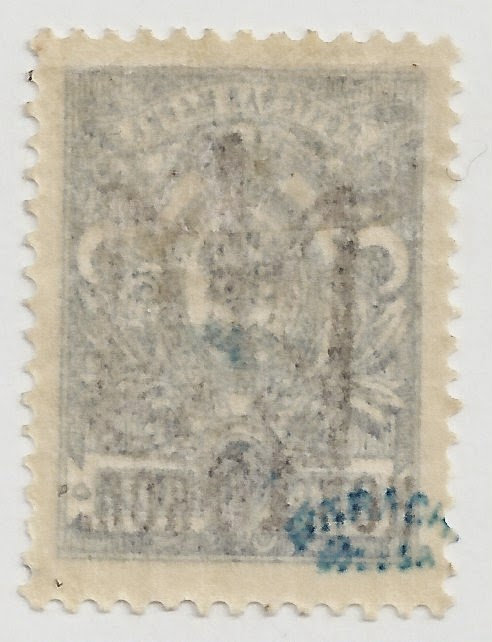 So: Today I claim to have identified an unlisted trident variety, Odessa 6b (Odesa 10) on 10 / 7 kopeck with one known used copy. Any more out there in collectors' albums? Do have a look!

But you can probably also work out why Unlisted tridents tend to stay in my back stock and never get processed: it's a lot of work to assess them!