How To Arrange and Write Up a Postal History Collection ....

Over the next few months, I want to "arrange and write up" an accumulation of about 1000 covers and cards. Yes, that's the scale of the backlog....  I don't exhibit at National or International shows which means that I am free to do what I want. I sometimes exhibit to collector societies (my national one is the British Society of Russian Philately) and I want a system which will allow things to be picked up and turned over and which has an Easy to Read write up.

I have settled for the "Cosmic" display system and specifically sheets divided into two pockets. The top pocket is large enough to take most covers and cards. For an outsize item I can use a single pocket page.

Since none of my material is shiny white FDC stuff, I wanted to avoid white paper for my write up which would just make my postal history look grubby. (It is grubby but let's not emphasise that). I wanted to use grey paper but that has to be ordered each time - you can't just pick it up at your nearest copier paper shop. So I am using cream as a second choice.

The write up is done in grey brown rather than black (which from a computer printer is too stark) and I use larger font sizes, 18 for headings and 14 for text. I try to vary the text and not to spend time on the Obvious - so I don't in general describe the stamps (which anyone can just see ..) unless they have some notable feature. 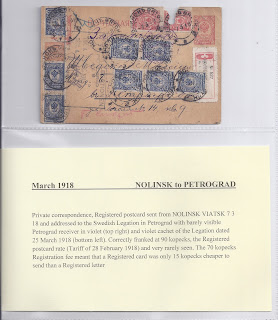 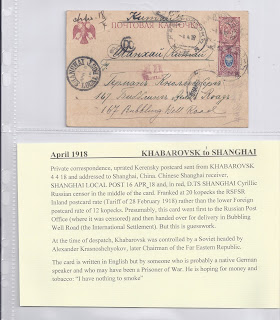 Anyway, in the last couple of days I have produced about 50 of these pages which reduces the backlog to about 950 ...

Some of you will have spotted where my title came from: as a boy, I read a book "How to Arrange and Write-Up a Stamp Collection" by Phillips and Rang and now freely available on Amazon.