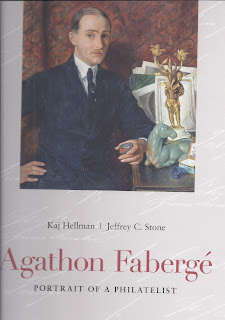 This remarkable book closes with two complimentary remarks made by contemporaries speaking about Agathon Fabergé; one described him as “a charming gentleman” and another as “a great philatelic scholar”. Those remarks could be applied to the co-author of this book, Kaj Hellman, who died shortly before it was completed. His fellow author, Dr Jeffrey Stone, has carried through the work to a splendid completion assisted by Kaj Hellman’s son, Oskari, and Kaarina Martilla who are responsible for an exceptionally well designed and illustrated book produced to a very high standard.

Agathon Fabergé (1876 – 1951) was one of the sons of the Imperial Russian court jeweller Peter Carl Fabergé. As a young man, he both worked for the family firm as a gemologist and became an avid collector of stamps and many other things besides. He had the resources to spend lavishly. The war and the revolutions closed the family business, resulted in the confiscation of many of his collections, put him in to a Bolshevik prison and - no doubt to survive - obliged him to work for the Soviet GOKHRAN organisation describing and evaluating Imperial jewels for later sale – in the end, it was the USA which would provide the market for them. It was not until December 1927 that Agathon escaped from Russia to Finland where he settled for the rest of his life.

My guess is that his decade in revolutionary Russia was traumatic. He never took employment after he left but also found it hard to downsize his lifestyle. He became a gentleman philatelist in constant financial difficulty, taking out loans against his collections and then losing them because he could not repay. Much of this is documented in this book. Kaj Hellman once told me that Agathon’s son, Oleg, on his father’s death had found his father’s office desk heaped with unopened letters, many containing bills long overdue.

Agathon Fabergé applied himself to his stamp collections in a spirit of scholarship making many discoveries which he simply noted for his own use and never published. This book retrieves some of that scholarship and makes it available. It also reconstructs many aspects of the ways in which “top end” philately was conducted in the first half of the twentieth century. We are introduced to a world of dealers who have very considerable financial resources to commit, to collectors who network extensively and exchange material privately, of international exhibitions, of personal feuds. Some of this reconstruction is enabled by Fabergé’s well-known habit of annotating his purchases, recording on stamps and covers who he had got them from, when and for how much. Hellman and Stone have made a big start on constructing a modern database of the annotations and this strikes me as an important piece of philatelic work. The Appendices to the text also contain valuable research material, notably in Appendix 2 which reconstructs Fabergé’s 1933 WIPA exhibits and Appendix 4 which is an inventory of known 1846 – 1851 Moscow postal stationery envelopes.

I would have welcomed a brief discussion of how Agathon’s collection was continued by his son, Oleg, who like his father periodically disposed of material ( Imperial Russian fiscals, Transcaucasia 1917 – 23) but also mounted up an extraordinary Zemstvo collection, which after his death was sold by Corinphila (1999) in what was the last remarkable auction of the twentieth century.

The book has been carefully proof-read, is surprisingly readable, and strikes me as a major contribution to the history of philately.