Dr Raymond J  Ceresa, who was best known for his encyclopaedic series of Handbooks on 1917 - 23 Russian area stamps and postal history, died on 10 June 2017. Ray Ceresa who was born in 1929 had been ill for some months. He is survived by his wife June and their three children. A fuller notice will appear here in due course, but readers who wish to post Comments can do so here. 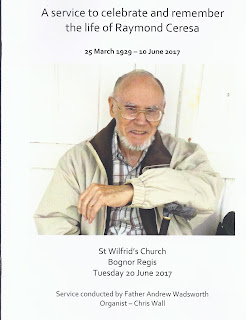