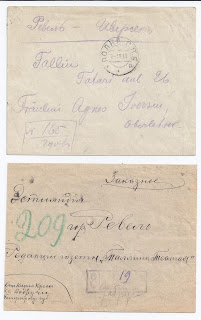 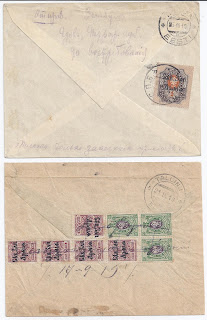 
There are stamp issues today where 99% of all use is philatelic. Think of issues for Antarctica, any country, any period. In these cases, the 1% of mail which is not philatelic is all the more interesting because it is what confirms the stamp issue as a genuine stamp issue, available to frank mail.

In the Russian Civil War, there were plenty of stamp issues. Some were completely bogus, some were in common use, and some had just 1% genuine use. This is true of the issues of the North West Army which in 1919 briefly controlled several post offices on Russian territory and was organised enough to pass mail backwards (westwards) into independent Estonia.

Have a look at the two covers above. I don’t think either is philatelic. The top one was registered in manuscript from Gdov on 2 10 19. We know that Gdov had lost its own canceller and was using the canceller of POLNA in what had been St Petersburg guberniya. The cover is addressed bi-lingually and has a TALLINN EESTI receiver dated 5 10 19. On the back the sender gives his street address in Gdov, Petrograd guberniya and there is also a one line note at the bottom which I would like someone to translate for me.

Igor Ryss provides the text and translation as follows:

This is important. It shows the sender thought he could receive letters as well as send them

The cover is franked at 1 rubel, so one might guess at 50 kop postage + 50 kop Registration.

The second cover is very interesting. Again it is registered. This time there is a standard rubber cachet but not much ink on the pad. In indelible pencil someone has written “19” as the registry number but in ordinary pencil underneath someone has identified the post office. This is not so easy to read until you look to the left and see that the sender gives an address in Dobruchin, Petrograd guberniya. [Igor Ryss translates the name of the sender as Carlo Kreos] The full name of Dobruchin is in fact DOBRUCHINSKOE and it was in Petrograd guberniya. It just about Googles ( 5 results) and is now in Pskov oblast, and so in 1919 North West Army territory. Igor Ryss tells me that I can get more results using the spelling DOBRUCHI and this also yields a map which shows the location of Dobruchi in relation to Gdov and Pskov.

The cover is addressed to a Tallinn gazette called Tallinn Theatre and there is a receiver cancel of 21 9 19 which touches the top right stamp. Now look at the franking. It’s one rubel made up of 25 kop in North West Army stamps and 75 kop in unoverprinted stamps, all used as a seal. The stamps are cancelled in pen and it is readable  DOBRUCHIN… PETROGRADSK…GUBERNI.. 17 – 9 – 19 (The clerk seems to have tailed off at the end of each word so I have put dots).

Two covers are better than one and it looks like here we have a one rubel registered letter rate used to send non-philatelic letters. This is the tariff that K.Freyman gives in an article in the British Journal of Russian Philately for 1951, cited by Dr Ceresa in his handbook on the N W Army issues; he also claims 10 kop for Printed matter and 50 kop for ordinary letters).

We also seem able to add Dobruchinskoe to the list of post offices under North Western Army control, not only because of use of the stamps but because of the backward journey to Tallinn which would not have been possible if this was an item of RSFSR mail.