In many countries and until very recently, post offices used formular cards to register despatch of parcels and money transfers. Fee payments from the customer were matched by adhesive stamp frankings on the formulars. In most countries, these formulars were archived in large quantities and eventually sold off or, quite often, looted . So for some countries formulars are very common: Latvia’s Parvedums are a good example

Formulars were also used for internal post office transactions and these are less often seen, perhaps because they were unfranked. In case of a temporary shortage of regular formulars, official business formulars were sometimes used with some handstamp or manuscript modification to indicate the different use. This is the case with the two items below which both use Official Business money transfer forms for ordinary over the counter transfers.

The first one was used in January 1919 at ULADOVKA in Podolia to send 283 rubels to Vinnitsa where it arrived and was signed for. The correct 3 rubel franking was all on the front with the right edge officially clipped (to prevent re-use of the stamps) before being sent to the archives. From there it found its way into the Vyrovyj collection and was sold as a single lot (Lot 303) in the 1986 Schaetzle sale of that collection. The formular is on thin paper and looks like a cheap post-1917 reprint and it is modified at the top left in manuscript to indicate its use for an ordinary post office counter transaction.

The second card was used at VOROSHILOVKA in Podolia to send 30 rubels to Shargorod where a receiver mark was applied though a note suggests that the money was not collected. This card has been expertised bottom right by UPNS ZELONKA.

Both formulars are rarely seen. 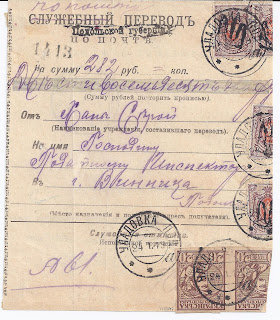 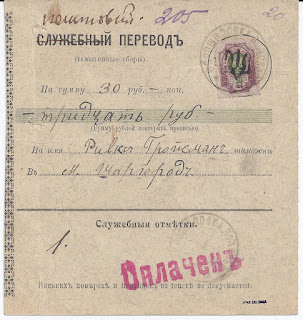