Someone once said to me that postal history collectors are really stamp collectors in disguise.

Part of the evidence, the fact that pre-philatelic mail trades at a huge discount on the prices achieved for early franked mail even when the cancellations, the routes, etc are very much the same. In addition, pre-philatelic mail is often in excellent condition because dealers and collectors have not been adding their pencil notes, their hinges, and their autographs for the past 150 years or more.

More evidence is in the fact that big areas of postal history are neglected because the stamps on the covers are the wrong sort of stamps. Collectors who supposedly specialise in the Russian Soviet Federative Socialist Republic (RSFSR) of 1917 – 23 generally show very little interest in the period 1917 -21 when mail continued to be franked with Imperial adhesives. Likewise, collectors of early post-Imperial Latvia want to see Rising Suns on their postal history, not Imperial stamps.

But from 1917 to January 1920, there also existed Bolshevik-controlled areas of Latvia and even a Latvian Socialist Soviet Republic, with is capital first in Riga from January until May 1919, then in Dvinsk [Daugavpils] and finally in Rezhitsa [Rezekne] where a new Cyrillic canceller was used which included the word “Latvia” rather than old Imperial “Lifland”.

It’s true that it requires a bit of work to establish what is and isn’t Bolshevik mail and also to get over the fact that much of what exists was seriously damaged by The Cutter - a post office clerk employed in Riga to clip stamps on Money Transfers and Parcel Cards and who took an utterly pointless job very seriously.

Here for example is what could have been a very attractive Money Transfer Card.
Addressed in Latvian, this card sends 3 rubels to the editorial office of “Zihna”, founded in 1904 as a Latvian Social Democrat journal and in 1919 the journal of the Latvian Communist Party, headquartered in one of Riga’s main streets, Elisabetes iela.

The card is an Imperial card and so is the etiquette bottom left which reads SEGEWOLD LIFL. in Cyrillic. But with the declaration of Latvian independence, Segewold became Sigulda and acquired a nice new Roman script canceller and a nice supply of red ink. But when Sigulda came under Bolshevik control in December 1918 (and remained so until October 1919 – von Hofmann’s dates), the Soviets used boring Imperial stamps in preference to Rising Suns, in this case 5 x 5 kop imperforate stamps paying the minimum Money Transfer fee of 25 kopeks. The card arrived in Riga on 2 May 1919, shown by an old Imperial Cyrillic canceller for RIGA applied on the reverse. The representative of Zhina signed for the card on 6th May.

Unfortunately, as you can see, The Cutter went to work on this card which is otherwise in very good condition – over a century not many collectors have taken an interest in it 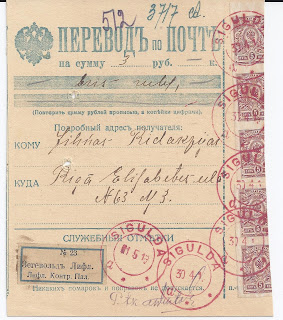 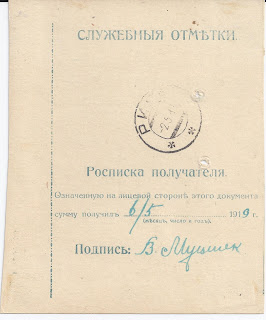