Back in December, I blogged about the first stamp of independent Armenia. Now I illustrate the state of my stock - see below.
From a stockbook now containing over 250 "k 60 k" stamps I constructed this matrix:

What strikes me is how many gaps there are in the matrix: all of column 2 is empty. There is only one stamps in Row 3, and this is a "Serebrakian Special" with his small boxed handstamp on the back - Serebrakian generally reserved this handstamp for stamps which he had in only limited quantities, originally made for him as Counter Surcharges 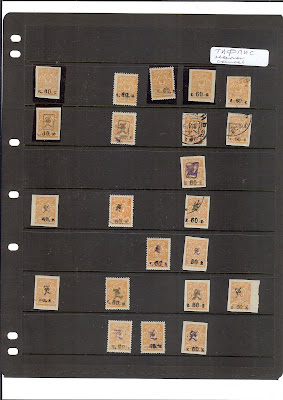 Posted by trevor pateman at 07:29 No comments:

1919 Formation of the Western Army 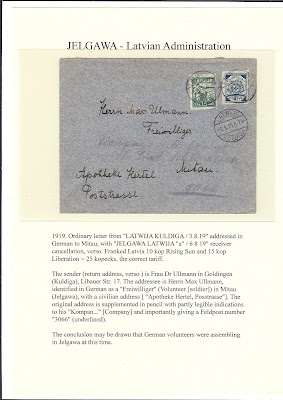 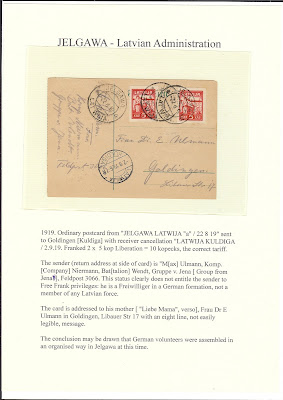 This cover and card illustrate how Western Army (Avalov-Bermondt)forces assembled in Jelgawa during the summer of 1919. The early August 1919 cover from Kuldiga is addressed to the Freiwilliger [Volunteer] Max Ullmann with a civilian address, corrected on arrival. The late August card from Max Ullmann spells out his complete military address on the left of the card.

Click on images and use your Magnifier to enlarge
Posted by trevor pateman at 13:51 No comments:

There should be an International Convention outlawing Bundleware.

A few years ago, I bought in America (unseen and for very little) a vast (45 kilo!) packet maker's stock of Turkey.

The previous owner, during his lifetime, had acquired tens of thousands of mint stamps in sheets and had simply broken them up into singles and bundled them up into hundreds. By the time I got them, the edges were curled, the perforations blunted and many of the stamps stuck together. That's what bundles do.

This dealer obviously wanted to reduce the value of his stock: when I bought it I paid about 0.0001 of a cent per stamp (or less). If he had wanted to preserve the value of his stock - he had some nice stamps - he would have kept the sheets in folders or, at worst, in small piles, only breaking up the sheets as and when needed for his packet making. Instead, he had created thousands of bundles - and there were thousands more which looked as if they were made for him.

As for used stamps, some low paid worker takes thousands of covers, cuts off the stamps, washes them off paper, dries them and then bundles them into 100s. Once again, corners and perforations get damaged. If the bundles are made before the stamps are completely dry, then rust spots (foxing) appears.

Since only single stamps can be bundled, multiples are broken up and postmarks lost.

This is another reason why bundleware in auctions sells very cheaply. So cheaply it's sometimes hard to say NO to it.

Luckily, I was able to sell part of the lot to a specialist just as I had bought it. The remainder went into a box. I pulled the box out today and thought, time to do something. I thought that I would open some of the bundles and transfer the stamps to stockbooks ...

Imagine my surprise when I opened a bundle of the 10 Bani blue of 1876 and out drops a clean used copy of the cliché error which produces a 5 Bani blue (Michel 44F, 450€ in the catalogue). It looks fine, but I will send it off for expertising.

The problem is this: next time I see really, really cheap Bundleware in an auction, I will want to buy it!
Posted by trevor pateman at 11:59 No comments:

Soviet Union: Use of a Pink Redirection label in 1930 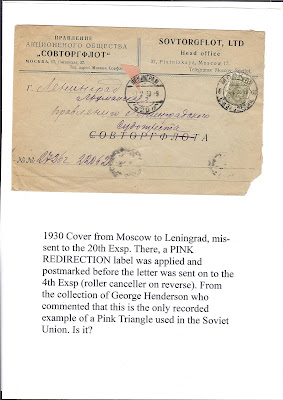 Click on the Image and on your Magnifier to enlarge
Posted by trevor pateman at 13:04 No comments: 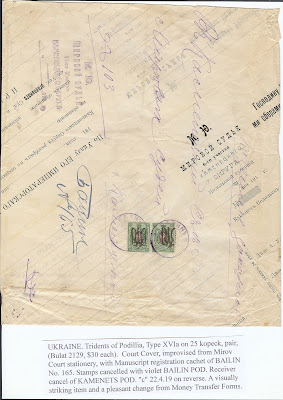 Posted by trevor pateman at 09:52 No comments: 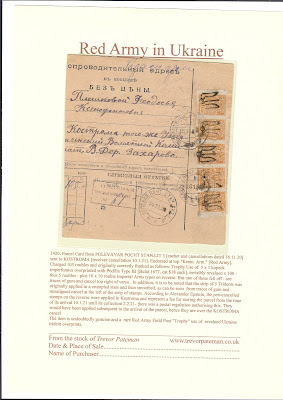 Click on Image and on your Magnifier to enlarge image

Posted by trevor pateman at 09:48 No comments: 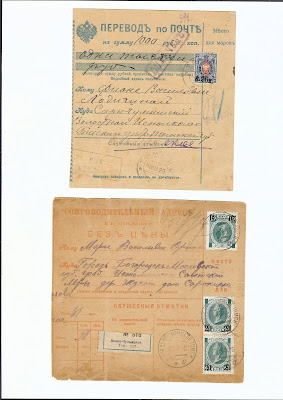 At the top. Money Transfer Form used at Tomsk 8 10 20, single franking with a forgery of the k 20 k overprint used as a Postmaster Provisional and revalued to 20 roubles (2% of the sum transferred)

At the bottom. Parcel Card used at Nizhne-Chulimskoe Tomsk 23 9 20, charged at 78 roubles. On the reverse, three Imperial Arms kopeck stamps revalued from 18 kopecks to 18 roubles; on the front, 3 invalidated Romanov 20 / 14 kop stamps pressed into use as Postmaster Provisionals and revalued to 3 x 20 roubles, thus exactly completing the 78 rouble charge.

Click on the image to see it more clearly; click on the magnifier on your screen to enlarge it.
Posted by trevor pateman at 10:12 No comments: 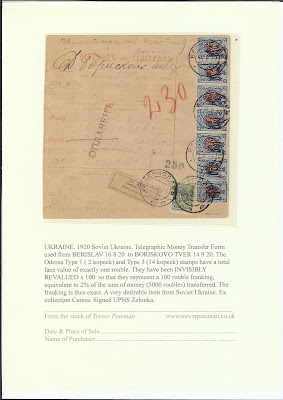 Posted by trevor pateman at 10:02 No comments: 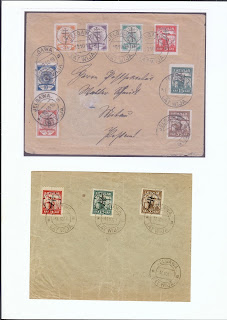 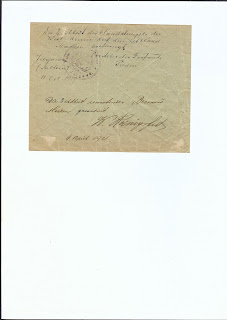 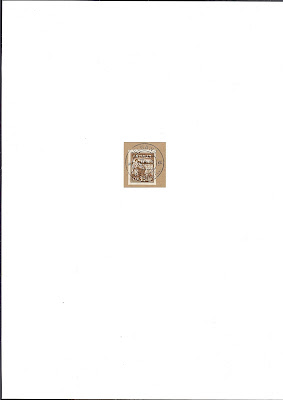 Posted by trevor pateman at 12:56 No comments:

A stamp has two sides, a front and a back. I won't say both are equally important, but both are important. A stamp is not just a pretty face.

In recognition of this fact, collectors have stopped putting hinges on mint stamps and some experts have stopped signing stamps - they provide a photocertificate instead. I think both are doing the right thing.

The back of a stamp is also a source of information. There are some issues for which forgeries can be identified simply from the paper or gum used. For example, the commonest forgery of the First Yessayan set of Armenia, which is very close in design to the originals, always has a very shiny gum which you never find on the originals, where the gum is matt. The paper is also thinner and more brittle. But you can check just the gum and if it's shiny, you know immediately the stamp is a forgery.

There are rare forgeries of rouble value Denikins (South Russia) which are very hard to distinguish from Originals until you turn over. The gum is also thick and brown as on a large proportion of Originals ( a small proportion of Originals have white gum), but it is applied differently, with a brush so that the gum looks like varnish, with streaks. When you find such varnished stamps (they are rare), it is worth then looking at the face to confirm that you are handling the forgery.