I have Blogged before about the distribution of Russia's Imperial Arms imperforate stamps, issued from 1917 on as Emergency supplies. Today I was looking at a big collection (Peter Ashford's) of Dashnak Armenia surcharges. I realised that it is only at the end of 1920 / beginning of 1921 - when the Bolsheviks entered into or  formed the government of Armenia - that certain imperforate values become available in Armenia, notably the 20, 35, 50 kopeck and 7 rouble.

This led me back to my Theory. Let's assume that the imperforates were all produced in 1917. But they weren't all distributed in 1917. That's the first part of the Theory.

If perforate stamps became available - either from fresh printings or from supplies found in a cupboard - then those were distributed in preference to imperforates, which were a nuisance at the post office counter. So if you look at mail from Petrograd or Moscow, the busiest post office counters, then you see that low value Imperforates come into use early (1917) and then disappear - perforated stamps make a comeback. That's the second part of the Theory. In principle, you could probably establish rough periods of use. I would start with the 5 kopeck as an example.

Just as important, I think that some post office districts got preferential treatment and that others had imperforate stamps dumped on them. Petrograd and Moscow are the most obvious districts likely to have been favoured. That's the third part of the Theory.

So where were the stamps dumped? The biggest receiver was Ukraine - and it is possible that this happened as part of some bigger deal at the end of 1917 / beginning of 1918 between the Bolshevik postal authorities in Russia and the government postal authorities in Ukraine. That's the fourth part of the Theory. The evidence for this claim is the fact that postal use of higher value kopeck imperforates though not common anywhere occurs earlier and more frequently in Ukraine, both before and after Trident overprinting.

(In this connection, I actually have some doubts about the usual story of devalued Russian stamps being sold across the border in Ukraine as what we would now call "Postage", creating the need for trident overprinting in order to safeguard post office revenues. Were there really at this time  - mid 1918 say - dealers travelling from Russia to Ukraine to sell stamps for ordinary postal use at a discount on face value?)

Leave that aside. How does the story continue? As the Bolsheviks regained control of territory from the Whites, so they often had to distribute fresh supplies of stamps. For this purpose, unwanted stocks of imperforates - still held in the distribution centre in 1920 / 21 - could be used up. That's the fifth part of the Theory. So if Armenia put in a call for fresh supplies of stamps at the end of 1920 / beginning of 1921, then it's call was partly answered by new supplies of imperforates. The alternative is to suppose that Melik-Pachaev or some other dealer was instrumental in bringing previously unavailable imperforates (the 20, 35 and 50 kop; the 7 rouble) into Armenia at that point.

Of course, the kind of theory I am outlining can only be developed by someone able to study the Archives in St Petersburg and Moscow. Maybe it has been done ...

Why did I have to think of this today? The sun is shining and I should have gone for a walk, but instead ...

In his Ukraine catalogue, which we all use, John Bulat has a long list of stamps overprinted with single handstamps of  Kyiv 2 type. The list starts at # 257 and ends at # 581. That's a lot of stamps. Pity that no one collects them.

In notes in the text, Bulat says that on kopeck values sub-types bb, ee, f, g, gg are stand-alone single handstamps in the sense that we only need a single stamp to classify it as having come from a single handstamp. In other words, bb,ee,f,g, gg are never to be found in the standard a- b - c - d - e five-cliche handstamp.

Consider the two strips of five below. Click on the Image to magnify if you think it will help:

At the top, we have single handstamp a on 4 kopeck perforate, Bulat # 262, catalogued $8

Underneath, we have single handstamp gg on 15kopeck imperforate, Bulat 536, catalogued $12.

What are his catalogue values values of?

In the case of the 4 kopeck strip, you could extract three collectible units: two pairs and the fifth (right marginal) stamp.

In the case of the 15 kopeck strip, you could extract five collectible units since these stamps are identifiable as coming from a single handstamp whatever - gg does not occur in any 5 - cliche handstamp

So what are Bulat's catalogue values values of? Here are some possibilities:

1. Bulat values are values for a strip of 5, whatever

2. Bulat values are values for whatever is the minimum unit from which you can identify a single handstamp having been used, so either a pair or - in some cases -  a single stamp

3. Bulat values are values for individual stamps but some stamps are only identifiable if they come in pairs

For the 4 kopeck strip that creates a range of possible Bulat values for collectible units in my strip ranging from $8 to $40 unless you think the two possible pairs are only worth the same as the one marginal stamp, in which case the top value drops to $24

Remember that in these same listings Bulat also gives values for rouble values which are always overprinted with single handstamps and always collectable as singles. So he must be valuing single stamps when he is valuing rouble stamps ...

I told you I was going to spoil your day .... Coming tomorrow: How many angels can dance on a pin head.

Posted by trevor pateman at 10:22 No comments: 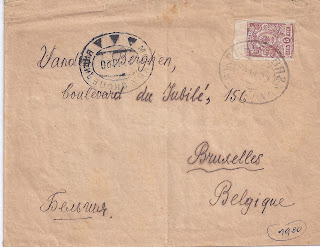 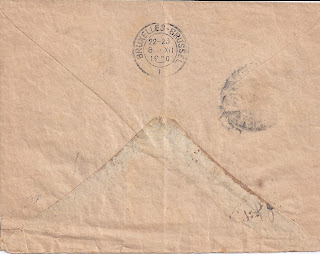 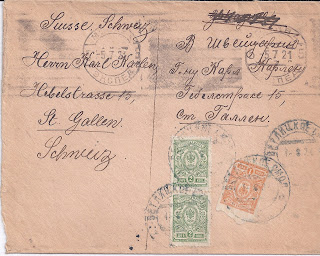 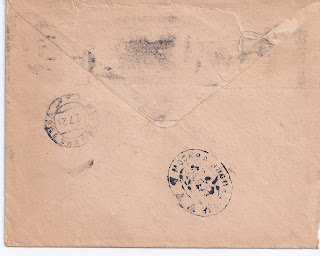 Posted by trevor pateman at 08:29 No comments:

RSFSR / Sovdepia: persistence of the 10 rouble Foreign Registered tariff in 1921

However, there is what one could call a normal or dominant 10 rouble Tariff for Registered letters, that is 5 roubles for a letter of the first weight step plus 5 roubles for Registration. This Tariff persists at least until the end of August 1921, as illustrated by the following covers. I date them according to the postmark applied to the stamps: 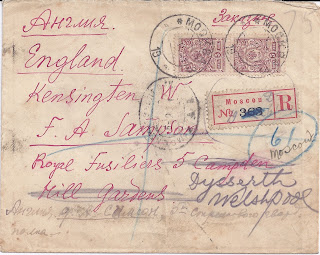 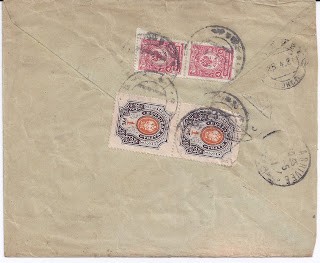 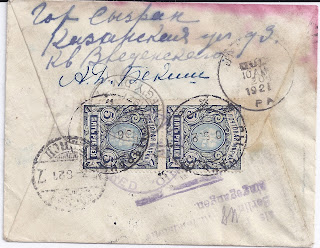 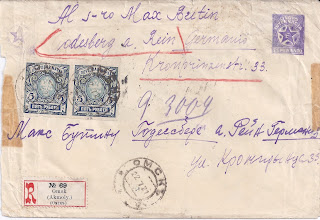 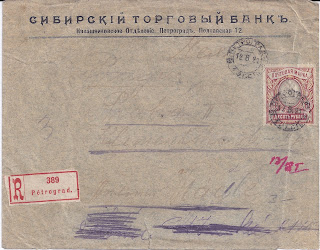 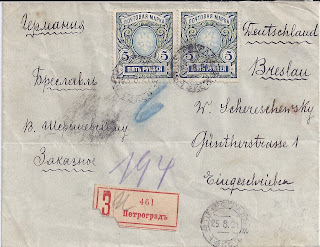 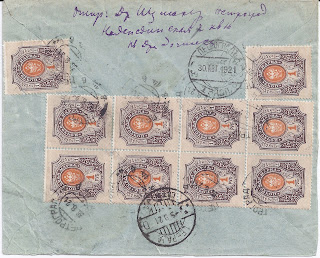 Posted by trevor pateman at 04:10 No comments: 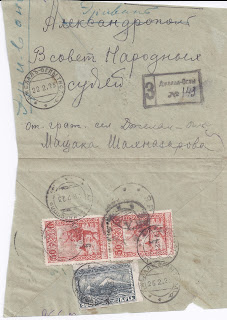 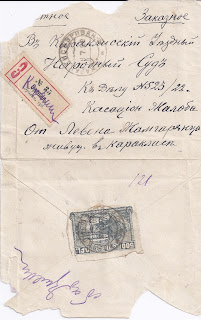 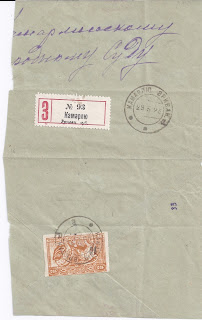 Posted by trevor pateman at 07:08 No comments: