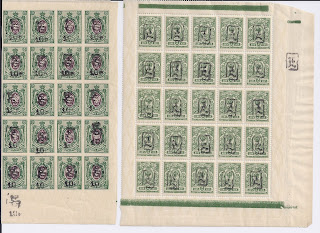 Posted by trevor pateman at 09:26 No comments: 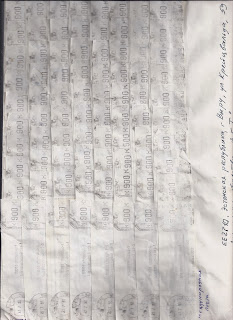 Some of us are slower to adapt to changes than others. Here is an office clerk stuck with a Soviet-era meter franking machine which only goes up to 9 rubles 99 kopecks. But he or she is trying to send a large envelope from Moscow to Estonia in July 1973. I count 86 individually-applied labels at 900 kopecks and 2 at 300 kopecks, yielding a total franking of 780 roubles. The Catch 22 is that the weight of these labels and the glue used to apply them probably altered the weight step for this letter ....

In other offices,clerks dealt with the inflation problem by removing the "k" for "kopeck" on the machine and inserting a "p" for "ruble". In this case, the franking could then have been applied by using just one label.

This is by no means the most exotic item you could find from Russia's 1990s inflation.

Posted by trevor pateman at 00:37 No comments: 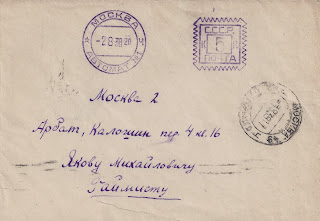 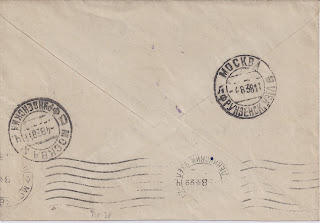 Romanovs in the Soviet Union

I came across this Banderole in a dealer's box. It reminded me that there is an interesting collection to be made from the posthumous (post - 1917) use of the 1913 Romanov Tercentenary issue and its associated stationeries.

The item shown is of course a 1 kopeck Romanov newspaper wrapper. It has been used as a Blank in 1932 by the Soviet Philatelic Association sending a journal to Austria. This is a very late use but it continues a practice established by the S Ph A in the 1920s to use / use up Romanov postal stationery.

The Romanov stamps themselves were invalidated in Bolshevik Russia at the time of the x 100 Revaluation in 1920 but even then some later, sanctioned (non-philatelic) uses can be found. In a previous Blog I showed the 20 / 14 kop Romanov being used at x 100 on Money Transfers in 1920 Siberia; it was almost certainly being used as some kind of Postmaster Provisional in the context of a stamp shortage.

It seems that the Soviets were reasonably relaxed about the Romanov stamps, except those portraying Nicholas II. Late uses of those stamps are rare and probably illustrate no more than a philatelist taking a risk. How big a risk, I don't know.

Posted by trevor pateman at 11:57 No comments:

Labels: 1920 Postmaster Provisionals, late use of Romanovs, Romanov issues used after the Revolution, Romanov stamps after 1917, Soviet Philatelic Agency in the 1920s

The One Kopeck Tariff in Russia, Imperial and Soviet

Imperial Russia had a One Kopeck tariff from 1866 to 1917. The items of mail which qualified for this concessionary tariff varied throughout the period, but still it should be possible to find every variety of Imperial one kopeck stamp used as a single franking. This includes the 1 kopeck imperforate of 1917 (I have one example). Below I illustrate an early item from the well-known Gunzburg correspondence. This is a single sheet of printed matter sent in June 1869 from St Petersburg to Vilnius, franked with a 1 kopeck on horizontally laid paper. I show both sides of the lettersheet (Click on Images to enlarge them) : 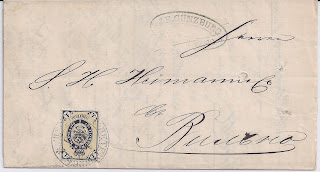 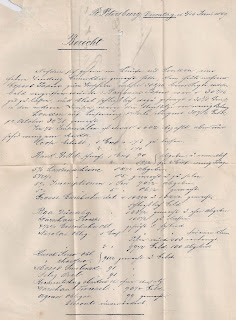 Perhaps more surprising, a 1 kopeck tariff was re-introduced in the early Soviet Union. I have only a few examples and illustrate them below. The first from October 1923 is a printed item sent locally in Petrograd franked with an imperforate Worker stamp. The second item is an unsealed envelope containing Printed Matter (PECHATNOE) sent locally within Leningrad in 1925 and franked with a perforated Worker stamp. You can see that it was unsealed, with the flap tucked into the envelope, because the roller cancel on the back does not run all the way across the flap. The final item is a single printed sheet sent locally in Leningrad in 1929 and franked with a large Head Worker definitive. The printed text would make it a nice item for a Pushkin collector 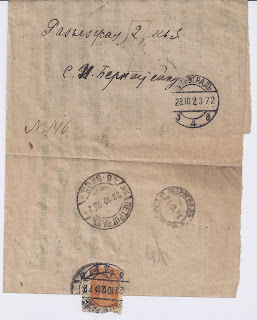 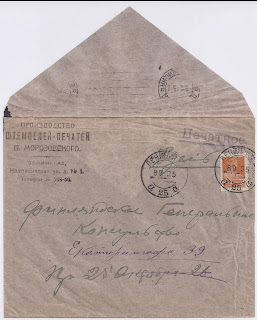 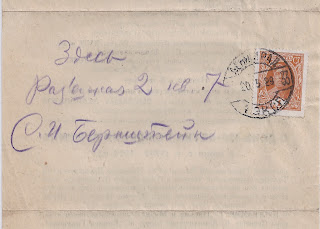 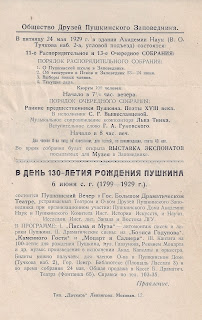 Whereas auctions are full of high-value frankings you will very rarely see 1 kopeck frankings in auction. But some of them are much scarcer than the 30 or 40 or 50 kopeck frankings. You will have to look for the 1 kopecks in dealers' boxes ...

Posted by trevor pateman at 12:21 No comments: