Romanian Occupation of Pokutia: A Puzzling set of stamps 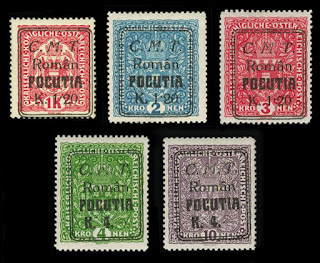 Ingert Kuzych  has sent me the above scan of five puzzling stamps. Below I reproduce his thoughts about them. But he would like to know more - if anyone now knows. If you do, please email him directly at ingert@verizon.net

A different type of “C.M.T.” issue exists, this time with a black-ink overprint of "C.M.T. Roman POCUTIA" on five high-value Austrian stamps and surcharged with new, higher values as follows: K. 1.20 on 1-Krone, K. 1.20 on 2-Kronen, K. 1.20 on 3-Kronen, K. 4 on 4-Kronen, and K. 4 on 10-Kronen (Figure 33). Two different handstamps were used in creating these stamps, the overprint design of which is far more refined than the simple one found on the regular “C.M.T.” occupational stamps. A double-lined frame surrounds the four-line overprint text, which is composed of three different fonts.

Very few of these “High-Value C.M.T.” stamps exist; they were supposedly also prepared for the 1919 Romanian occupation but never issued. The ‘K. 1.20 h.’ values match the ‘1 K. 20 h.’ values of the regular “C.M.T.” Issue; the ‘K. 4.’ values would have served to pay for telegram services. However, the exact reason for their manufacture – legitimate need versus speculative creation – remains unclear. A set of the five unissued values is apparently quite rare, with one expertizer claiming to only know of two complete sets ever assembled.