How people spend their free time and their own money is pretty much their own affair. Each one to their own taste. But it's always sad when you realise that someone is not doing what they think they are doing.

New Issue Collectors often seem to  think that they are making an Investment for the Future, their own or their children's. Most of the time, they aren't. At the Paris Salon d'Automne, I used to watch from my Stand as - at the opening of the Show - hundreds of men (and a few women) ran towards the counters of La Poste to buy the latest "philatelic products" (as they are called in France). But every dealer watching knew that in a few years' time, those eager buyers would be lucky to get back 70% of the face value of the stamps they had purchased and which can only be sold off as "Postage" for use on the mail-outs from stamp dealers and auction houses. As an Investment, they do worse than keeping your money under the bed.

It's not a universal truth that buying New Issues is a doomed Investment. Agathon Faberge was a New Issues collector. He just had the good fortune to buy Zemstvos, often in sheets since the stamps only cost 1 or 2 kopecks each.

Heritage Collectors are not always philatelists and, as a result, often end up spending money on things which have nothing to do with the Heritage they think they are collecting. They are often enough victims of forgers and forgeries. It's quite often painful to look at "Heritage" collections for Armenia or Ukraine. You will see things which have never been near either country but have been fabricated in Paris or Moscow or California.

Some Heritage Collectors are more fortunate. If you go round a European stamp show looking for postal stationery cards written in Yiddish, you won't be disappointed - even now in 2014 nearly a hundred years after Yiddish started its post-World War One decline as a written language, you can find the cards in the boxes from Imperial Russia (the "Pale of Settlement" areas), from K u K Austria, and from Romania. It would be hard to fake them and not very rewarding - you will pay between 5 euro and 15 euro for a card, that's all.

Likewise collectors of their local Heimat  - home town -do better than those who take a whole country as their heritage. Picture postcards and postmarks of your home town can be bought with reasonable confidence and often cheaply and it's generally easier to build up your own knowledge for a single town or city than for a whole country. Dresden is easier to master than Deutschland.

Of course, for a country like Armenia, Heimat collecting would be very frustrating. There just isn't the material, at any price. But for Ukraine, it's possible and, I think, fascinating. You don't even have to pick a big city.

The same is true for Russia and the Soviet Union and it surprises me that more collectors do not choose to concentrate on a single town or city. There are opportunities and surprises from Archangelsk to Zlatoust! 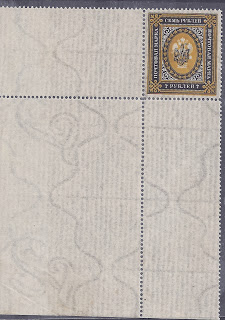 Before about 1900, sheet watermarks in papers are often very elaborate. They go well beyond telling you the papermaker's name. Beehives, Eagles, Castles .... So it is not surprising that there are collectors of such watermarks. It's just rather difficult to display the material - you need light boxes.

About a dozen years ago I bought the Lindenmeyer collection of Ukraine (the Lindenmeyer who catalogued the Fabergé Zemstvo collection for sale at Corinphila in 1999). In it were many attractive items like the one above. It's a Poltava Type 2 trident on the "old" 7 rouble stamp of Imperial Russia (Bulat # 1030, catalogued $275). It's never hinged mint.

But what "makes" this item is the beautiful sheet margin watermark, which only needs black backing paper to make it visible. It is a papermaker's triumph: not only are there the vertical lines which philatelists concern themselves with but the beautiful ornamentation which can only be appreciated when you have marginal stamps like this one.

One of my uncles (Jack Burke) worked as a crafstman papermaker in an old paper mill at Eynsford, Kent in England. The paper was made by hand, the craftsman shaking the pulp into sheet format. My uncle told me that sometimes a man would suddenly lose the ability to shake correctly. That was the end of his career.

At home, Uncle Jack kept samples of his work, heavy rag papers which were I imagine off the Richter scale in terms of gsm. They had watermarks. When I was a boy in the 1950s, he would sometimes give me a few sheets. I remember them mainly because the edges were so sharp that you could slice your thumb open if you ran it along the edge of the paper.