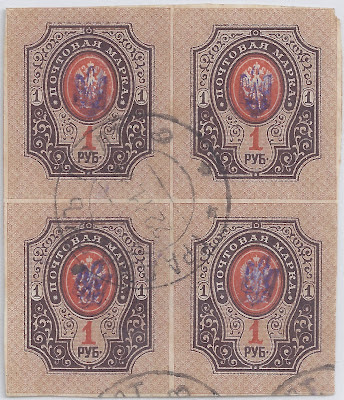 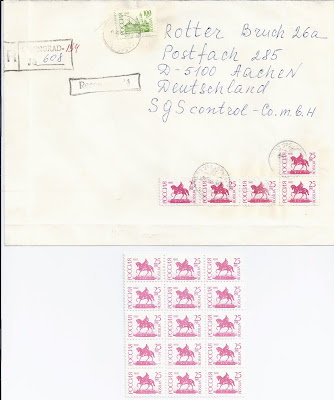 The 25 rouble stamp above is a Postal Forgery, made to defraud the post office. It was quite widely distributed and used on commercial mail in the 1990s and is listed in Michel as 239FFa. The stamp is gummed, but the perforation is wrong (11 instead of 12.25 x 12) and the colour is wrong. The design is poorly defined but the overall appearance is good enough for it to pass, even at the post office counter on a registered letter. This one was sent from St Petersburg in 1993, but I cannot work out the exact date.

If you go through large quantities of Russian commercial mail of the 1990s you will find this forgery maybe 1 in 1 000 or 1 in 10 000 letters. There are other postal forgeries (for example, of the 100r from the same definitive series) but I think they are less common. The mint stamps are hard to find, since people were using these stamps to defraud the post not to add to their collections. Some philatelists did recognise the Forgery and created philatelic covers using it ...

It's the kind of thing which can make even modern, boring office mail very interesting to the postal historian.
Posted by trevor pateman at 09:32 No comments: 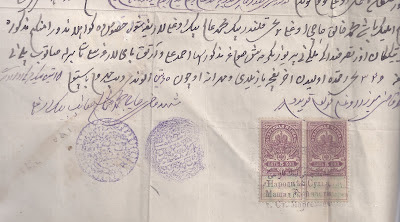 Can anyone help identify the date and place from which this document comes and tell me in what language it is written? Thanks. Answers below ....
Posted by trevor pateman at 01:44 3 comments:

Soviet Ukraine 1921 - I Have to Invent a Word for This Item! 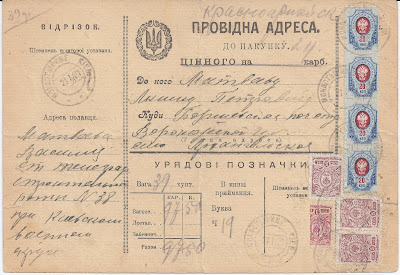 Here is an interesting item: a scarce Ukrainian National Republic formular for sending parcels, used in Sovietised Ukraine in January 1921. It is endorsed "Red Army" in pencil at the top and is being used to send a large package (39 Funt) from MONASTIRISHE KIEV 27 1 21 to Borshevo Voronezh (arrival cancel on reverse 11 3 21). The cost of sending this parcel is shown at the bottom as 97.50 (and this will be roubles rather than Karbovanets). With stamps revalued 100 times, it looks at first sight as if the franking totals 98 roubles. But wait a moment ... 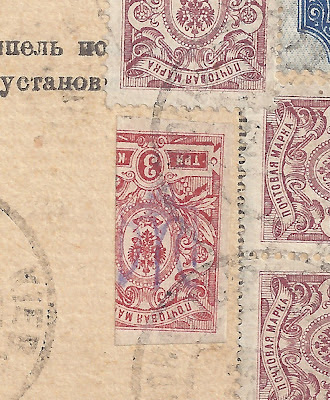 Look at the 3 kopeck imperforate with Kyiv II Trident overprint. This has not been badly cut. It has been cut to approximate a 2 roubles 50 kopecks stamp. The stamp has been sexisected (bisected, trisected, quadrisected... I am not even going to look at the Dictionary to see if a word exists. I have decided that the right word is sexisected :))

Maybe the postal clerk put the unused, sexisect portion into his accounting book to show why he had only received 2 roubles 50 for a 3 rouble stamp. Maybe he used the sexisect on another parcel card which needed a 50 kopeck stamp.... Who knows. But I think the clerk's intention was clear.

Posted by trevor pateman at 23:08 No comments: