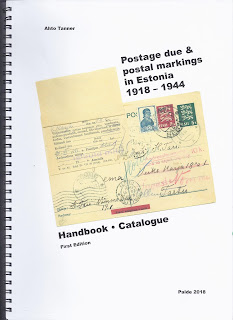 Posted by Trevor Pateman at 11:44 No comments: 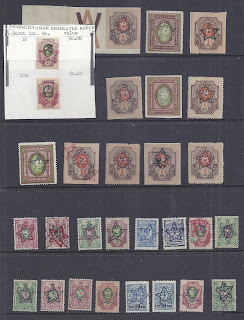 Posted by Trevor Pateman at 09:53 No comments:

Tidying up my stock the other day, I came across these three stamps in a packet. I was about to add them to a section of common 5r Dashnak Armenian overprints when I realised they were not quite right. They are, in fact, overprinted centrally with a 3r handstamp and its accompanying monogram above. So that suggests they are “counter surcharges” – unofficial combinations of stamps and overprint done as a favour to a collector or dealer. For Dashnak Armenia, Michel does not list these counter surcharges but Gibbons does and so does Ceresa in his handbooks. Both are following the listings in Tchilingirian and Ashford’s books ( now over sixty years old).

But then I noticed something else. On all three stamps, you can find part of a “5r” overprint above and to one side of the 3r overprint. But you cannot find more than a trace of a 5r monogram. What is going on?

I think this is a case where a clerk may have made a genuine mistake and tried to correct it. So these are corrected surcharges, not counter surcharges. To avoid the mess of two monograms, he tilted the 5r handstamp so that the monogram does not print. But this also meant that the 5r does not print properly either. On the dark background, it’s not clear what has happened. Whatever has happened the reuslt is a mess and from a practical point of view, a failure.

All three stamps are from the same sheet – they are all off-centre in the same way. All were signed by Theodore Champion, a careful Paris dealer of the time, and all were later signed RJC [ Dr Ceresa’s first handstamp]. But Ceresa does not list this variety in his Armenia handbook. Perhaps he also put these stamps into a packet and forgot about them.