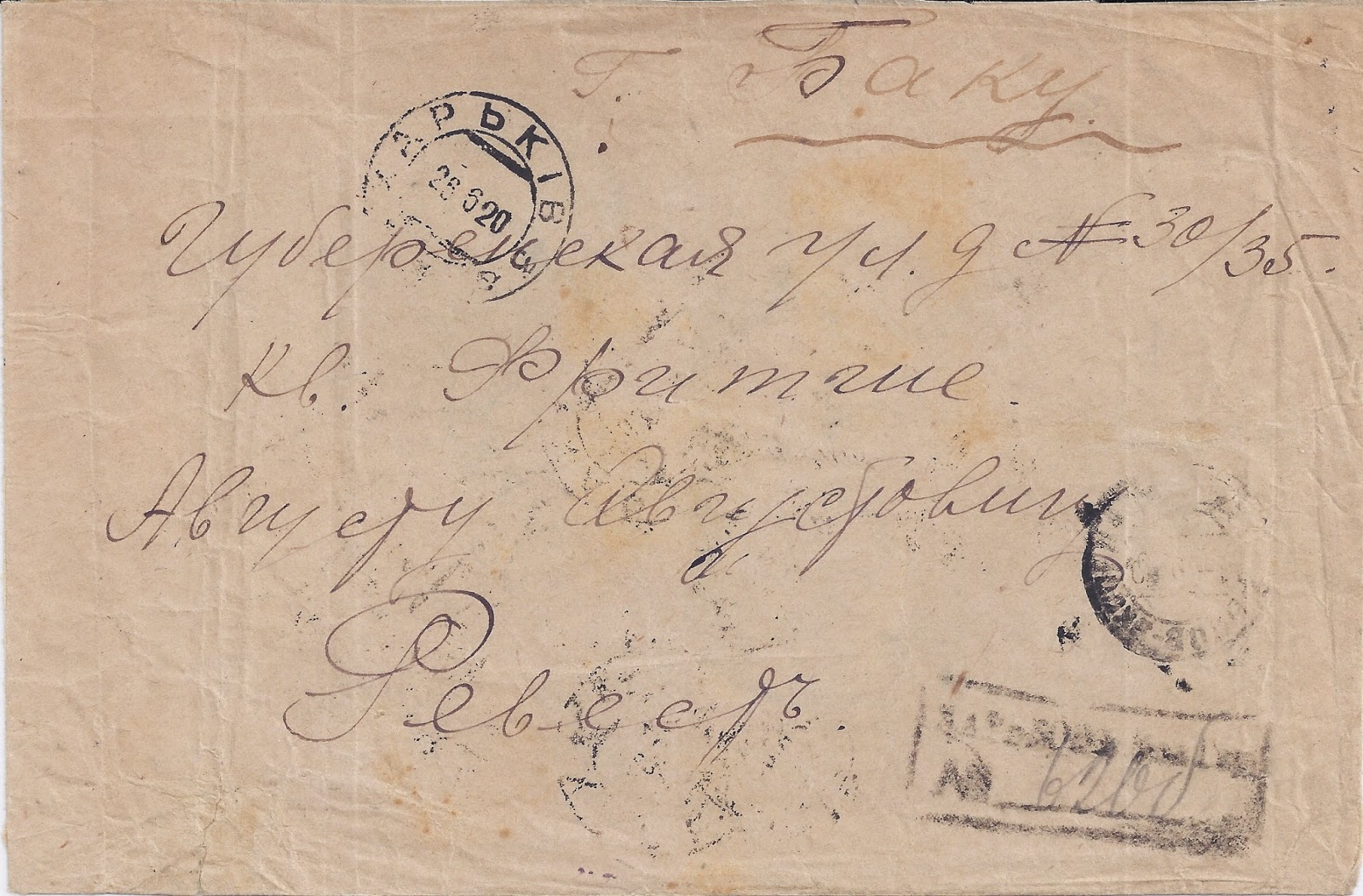 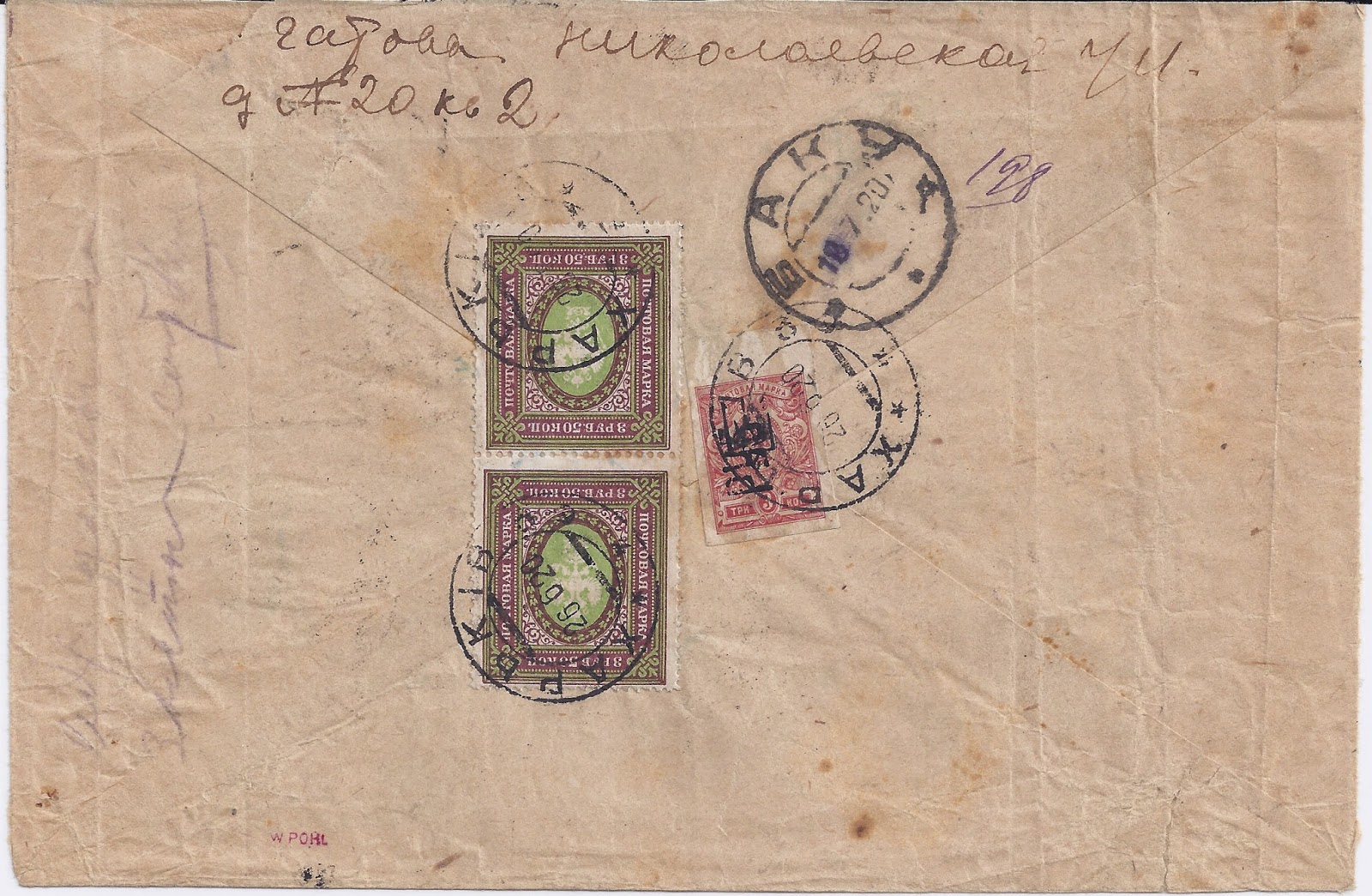 Collectors of Transcaucasia 1917 - 1923 will occasionally find the handstamp A.REVEST on the backs of stamps. From Googling, I found only that A. Revest was a member of Rossica in the 1950s and living in France. He had stamps of Transcaucasia for sale.

I bought the above cover as a nice example of a 10 rouble Registered franking from 1920. Sent from Kharkiv to Baku in June 1920, it has a pair of perforated 3r50 stamps used at face value and an imperforate 3 kopeck (with Kharkiv type 1 Trident) revalued x 100.

I looked at the front and noticed the name "Revest" at the bottom and I translate the first name and patronymic as "August Augustovich". If I am right, then this is most likely to be the A.REVEST of the handstamps, living in Baku in 1920.

Does anyone have more information?

Added 5 Feb 2015: Here is A. REVEST's signature on the back of a (genuine) Armenian stamp: 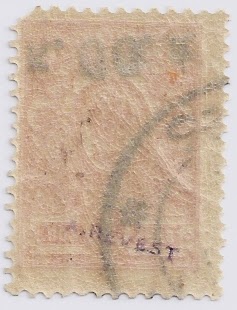 Not very attractive, but this is an example from the first Soviet Union meter franking machine, introduced early in 1928. Several face values are known with the 2 kopeck providing most examples, probably because it could be used on bulk Printed Matter - the example above is on a long envelope addressed to Dresden. More details of Soviet meter franks can be found in the International Postage Meter Stamp Catalog, on line at wikibooks.org

The Mark is unusual because no city of origin is indicated, though the bars above and below the date look as if they might be "dummies" intended for replacement at a later date with some kind of information. The stamp design has POCHTA at the top and CCCP in the middle
Posted by trevor pateman at 09:06 No comments:

Armenia in the Michel catalogue

Here are some thoughts on the Michel listing for Armenia. Your Comments are invited.

It is important to understand that Michel lists only stamps which, on the basis of archival research by C Zakiyan, are known to have been officially authorised. Counter surcharges made for dealers like Serebrakian and Melik Pachaev are excluded. In contrast, the Stanley Gibbons listing – based on the work of Tchilinigirian and Ashford – includes these counter surcharges.

-          The earlier small overprints are roughly as common in black and in violet. But the larger overprints are scarcer in violet and are worth about x 2 to x 5 the price of black overprints

-          Large framed Z on 7 rouble imperforate exists and may be an official overprint, since the original handstamps would not have been available for late overprinting.

-          The valuations for Michel 65,66,72,73,84 are completely wrong based on a mis-reading of C Zakiyan’s first book. Zakiyan gave REMAINDER numbers for various stamps; Michel thought they were ISSUED numbers. Michel 66 for example is a common stamp worth maybe 15 €, not the 750€ given in Michel.

-          The combined surcharges with framed Z (Michel 86 – 101) are all much scarcer than the unframed ones; Michel makes no distinction in valuations, though it lists the two types separately (Michel 86 - 101 for framed Z; 102 - 118 for unframed Z). Michel does not separately list stamps where the rouble Monogram has been obscured leaving the underlying Z clearly visible.

In general, framed surcharges are worth x 5 – x 10 their unframed equivalents. Only Michel 100 is quite common.

-          Stamps from the Original printing are probably worth 1€ each imperforate and 2 – 10 € each perforate. The 25 000 brown perforated is a rarity and worth 500 €. Confusion is created by the common Reprints/Forgeries of all values in both perf and imperf.

-          It is a specialist task to distinguish the three printings.

-          It’s very strange that Michel does not provide separate listings for the Metal and Rubber handstamps, nor for the three main colours (red, violet and black). This could be done quite easily. It is correct that the red Rubber overprints are generally scarcer. Red Metal overprints are probably Soviet reprints.

Posted by trevor pateman at 12:19 No comments: