I need hardly tell my readers that Quarantine is in the news….

In the nineteenth century, quarantine was always in the news. All travel involved risks and in areas like the Mediterranean and Black Sea where large movements of people were part of everyday commercial life, authorities monitored people and ships constantly. Letters going from A to B were disinfected on the way if it was believed that A was in the grip of some outbreak of infectious disease. Ships could only enter port when granted certification that they ware disease-free. And so on.

In the forthcoming sale of the Christou collection at Heinrich Koehler Wiesbaden there are a large number of lots which relate to quarantine, notably certificates issued under the denomination of Patente de Santé. Some are issued by Russian authorities and some by Ottoman, some are in Russian and Arabic, some in French. Here are a few examples: 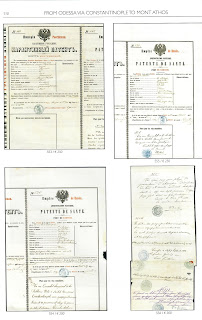 Of course, you may be quarantined and unable to view these lots in Wiesbaden. But fortunately there is no quarantine on viewing online or bidding online …. All the lots are illustrated at the link below:

Posted by Trevor Pateman at 06:19 No comments:

Many auction houses produce catalogues which have separate sections for “Single Lots” and “Collections”. I think the general idea is to point collectors towards the single lots and dealers to the collections. In Germany, the distinction is also marked by different colour paper: single lots [Einzellosen] are listed on white pages and collections [Sammlungen] on yellow pages - Gelbeseiten.
In the past, material on yellow pages would be sold on the same day, convenient for dealers who wanted to (and in the past, did) bid in person.

My advice now to both collectors and dealers is to ignore the Single Lot/ Collections system. It is never used consistently - you can find “Single Lots” containing ten items and “Collections” containing two. And it often involves putting “collector” material into dealer sections, though perhaps less so vice versa.

I was reminded of this today when I received my latest and very interesting Heinrich Koehler Hauptkatalog [Main Catalogue]. Most of the white pages describe lots in English, though Austria, Switzerland and the very big Germany section are in German. All of the yellow pages describe lots using German, as if they might only be of interest to German dealers who will all turn up on the appointed day as they always have done ....

Collectors will easily miss out if they ignore the Yellow Pages. I will pick a couple of examples where I am familiar with the material because I am the vendor J

For Russia and the Soviet Union, there are over eighty yellow page lots (Los Nr 4281 - 4308). Most are indeed album collections and quite big cover lots and many will not interest a collector who already has a collection and a clear collecting theme. But then look at Los Nr 4307:

Well, this is accurate and translates as follows:
1920 2 Parcel Cards and one Money Transfer Form in new Soviet printings, scarce from this early period.      Start price  100€

BUT this small lot is unlikely to excite a Yellow Page-focussed dealer; it is very specialised and will I think only excite a collector who understands a bit about Russian formulars and maybe guesses that these post-Imperial formulars will (for example) not show the Imperial coat of arms. Three examples of new post-revolutionary  designs is not going to be too many for a serous collector to want to see or own.

Here’s another example. There are two lots for Iran. The first (4408) is a duplicated collection for the whole period 1876-1956. Good yellow page stuff. But the second item ( 4409) is rather different:

which translates as
1886 18 Postal Stationery cut outs of 5 Ch on pieces with postmarks of 14 different places, on a written-up album page    Start price 200 €

Now this might interest a dealer who thinks they can sell these 18 items one-by-one. After all, they are catalogued as an issue. Equally, what is being described is really just one specialist item: its evidence that the officially-authorised stationery cut outs  - used as provisionals during a stamp shortage -  can be found used from at least these 14 places. If I was a classic Persia collector and did not already have a similar album page I would jump at this lot.

So take my advice, if you are a collector don’t ignore the yellow pages even if you need a dictionary to help you out. There are many more interesting items where I found these two  .... Happy hunting!
Posted by Trevor Pateman at 07:36 No comments: