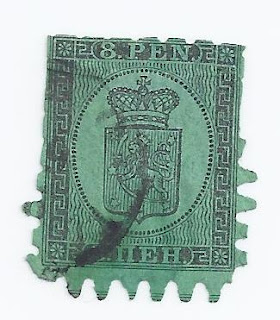 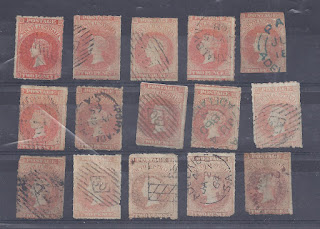 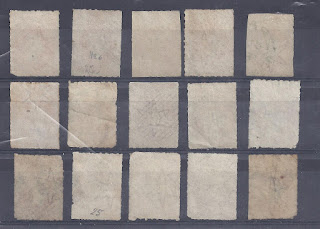 Posted by Trevor Pateman at 12:54 No comments:

Salvage Philately 2: Stamp or Cover? That Is The Question ... 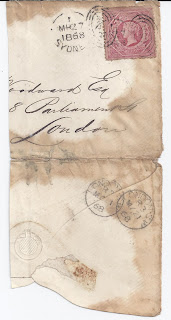 Unless the UK descends into complete chaos or the grim reaper decides that my time is up,  I will be at the LONDON 2020 international stamp exhibition in May 2020. I have booked two stands: on one, I will sit with my specialist stocks; on the other, I will try to sell off all the bin ends, bits and pieces, mistakes, and so on from my time as a dealer. There will be just two prices on this second stand: £5 and £2, and the aim is to offer good value for those prices.

As a dealer, I try to use my time well but like many dealers I fail. The simple pricing system - either it goes in a £5 box or into a £2 box - does save time, but only if I don’t think too much about what I am doing. In relation to stamps, it most definitely does not make sense to check perforations or watermarks or even postmarks unless they are very obviously significant. Nor does it make sense to clean up used stamps by soaking off old hinges and so on.

Collectors have a different set of problems. Take a look at the fragment of a cover illustrated above. It actually shows a lot of information of interest to a postal historian: (1) dated Sydney despatch cancel for 27 March 1868; (2) dated London arrival marks for 21 May 1868, as a result of which we know the total journey time taken by what was this letter; (3) a one shilling stamp which could have been the entire franking - I don’t know what the tariff was but a specialist will and will thus know if the franking is still complete.

The fragment - though it is without pencil notes or hinges - has been badly affected by water and quite possibly by water which was not very clean when it encountered the cover. The stamp has been affected.

A stamp collector might look at this fragment and decide to wash the stamp off . There will be no hinges on the back of the stamp, no thins, and when thoroughly washed the overall appearance might be really quite good and it will be easier to verify which stamp is actually on this piece. I measure the perforations at 13 and so the stamp is either SG 168 (rose-carmine, cat £8) or 169 (carmine, cat £8.50).

Well, at those values it is hardly worth the effort - you could buy a better looking loose stamp from a dealer for half cat. or less.

My decision as a dealer is to leave the stamp on the piece and put the piece in my £5 box without comment. If it doesn’t sell there, then in due course it can go down to the £2 box. Of course, I  made the decision in two seconds - and before I started to study the fragment to write this Blog post.

Oh, and I forgot something: for the social philatelist there is a lot more information on this fragment: “…Woodward Esq    8 Parliament St     London” is enough to Google with even if you have to play around a bit to get results (there are results).

Posted by Trevor Pateman at 05:24 No comments:

All museums and all collecting hobbies started out by removing things from their context. I can’t think of an exception. This was very evident in early “cabinets of curiosities” which were no more than magpie hoards of this, that and the other. Likewise, the Vatican drawers, created for the purpose, were full of the detached relics of saints but contained no actual saints.

When stamps were introduced in 1840, it was the job of post office clerks to remove them from the sheets - which provided their initial context - so that they could be stuck onto envelopes. Early collectors promptly removed them from this context of use, the envelopes onto which they were stuck. Only later did collectors begin to show an interest in sheets (to which were later added booklets and coils) and an interest in covers, out of which has developed the hobby of postal history collecting.

What is now called “Social philately” is simply an expansion of the context into which collectors place their stamps or covers and it has been greatly enabled by the ability we all now have to google something, to find out who wrote a card, who was the addressee, what a town was like one hundred years ago, and so on. Likewise, serious stamp collectors have long been interested in stamp printers, the machinery they used, the inks they sourced, the ways in which they marketed their services, the scams in which they were involved.

In these ways, stamps and covers are placed in an ever enlarged context of social and economic relations. But “Social philately” is really a matter of degree rather than of type. Anyone who ever googles to find out who wrote or received a letter is engaged in social philately, even if it is not the main focus of their interest. On this Blog, see this post as an example of what might be involved:

The potential of  social philately is well-illustrated by the collection held by Boston University where Professor Thomas Glick amassed several thousand stationery cards from the archives of a pre - 1914 Romanian grain dealer. The cards allowed the way in which business was done to be reconstructed from the written texts on the cards and the places from which they were despatched. They also show a business being conducted in two languages, Romanian and Yiddish.
See
http://www.thomasfglick.com/shtetlproject.html

Many other correspondences exist which were originally in commercial, family or state archives and which allow similar reconstruction projects to be undertaken, though often the archives are quickly dispersed before anyone has the chance to buy them up intact. Similarly, printers’ archives have been broken up and individual items often command prices which make any thought of reconstructing the whole archive unrealistic. But it is entirely possible to reconstruct from a limited set of examples how, for example,  a nineteenth century stamp printer worked.

Posted by Trevor Pateman at 07:53 No comments: