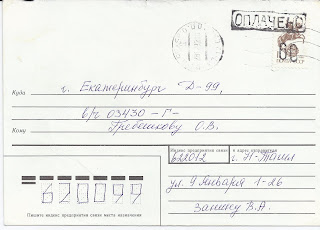 Wanted: An Expert on Green Crayon Used in Constantinople 1920 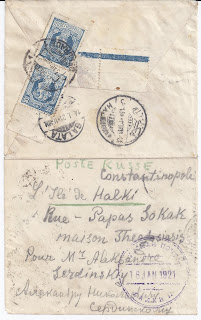 
In previous Blogs, I have written about the (White) Russian Post in Constantinople which existed before the evacuation of Crimea at the end of 1920 and which facilitated the delivery and onward despatch of mail from White controlled south Russia and Ukraine which came to Constantinople from the Black Sea ports. This Russian Post was clearly facilitated by the Allies who had Occupation forces in Turkey after the end of World War One. This Russian Post was the basis of the idea for a Refugee Post which never, however, translated into a real postal service.

The opened out cover above is addressed to Alexander Sredinsky [his name spelt wrongly on the cover] who was Postmaster both of the Russian Post and later the would-be Refugee Post. The letter started out in BELGRADE  3 XII 20, arrived in Turksih GALATA 14 1 21, and was sent on to Turkish HALKI. All this information is on the reverse.

It was common at this period for postal officials to clarify an address by underlining the important bit in crayon. For example, on mail from Russia to Germany and German-controlled areas in 1918, officials used blue crayon to underline town names. This blue crayon was probably applied in the Koenigsberg transit office.

On this cover, the destination “Ile de Halki” has been underlined in green crayon, just the kind of thing a Galata arrival office clerk would have done faced with a messy address. It’s enough to get the letter into the bag destined for Halki. But in the same green crayon, there is written “POSTE RUSSE”.

Now the interesting question is this: Did a Turkish clerk in Galata use this green crayon, adding the words “POSTE RUSSE” to clarify the destination still more, or did Sredinsky enhance the cover by doing the green crayon work himself? In the same way, it would have been Sredinsky who applied the 16 JAN 1921 KHALKI  receiver cancellation of the RUSSKAYAR POCHTA – normally associated with Refugee Post covers.

The letter is non-philatelic and simply an item of personal mail addressed to Sredinsky who enhanced it with the Russian Post cancel of Khalki. But maybe the green crayon is Turkish and shows that postal officials were aware of who Sredinsky was and what he was doing.

So: does anyone have clearly Turkish green crayon from 1920? 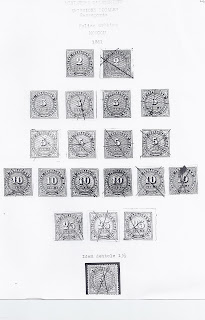 Above is an old Xerox copy of a page from the Emile Marcovich collection of Russian fiscal stamps. It shows the 1861 Moscow Police issue. I have copies of all the stamps except the last, perforated, one and I have never seen an example of the perforated stamp.

The problem with a stamp like this is the possibility that someone has created a variety by perforating an imperforate stamp. True, the perforation is high quality. On the other hand, did Moscow police in the 1860s or even after have access to good perforating machines? And if Moscow perforated , why did St Petersburg not do so for the equivalent 1860 issue of police stamps?

In the absence of archive documentation, to establish the credentials of a stamp like this we really need to see an example used on a dated fragment of a document – we know what the documents should look like because plenty exist. We also need to see more examples of the stamp itself. Any offers?

The Aesthetics of Album Pages


A popular way of collecting is to devote one album page to each stamp issued by some postal authority. At the top of the page, you put an example of the mint stamp and underneath you put a card or cover showing postal use, perhaps as a single franking. Then you provide the necessary written description.

There are two problems with this approach. In many cases, either the mint stamp or the postal item will be very hard to find and very expensive if and when you do find it. So if you are collecting Central Lithuania, it is easy to create a set of pages with an example of each stamp issued at the top. But the postal items? They are scarce and I actually doubt that they exist for some stamps supposedly issued. You will find CTO stamps but even loose postally used ones will be rare or non-existent. So you will end up with a lot of more or less blank album pages.

There is a second problem. If you put a single mint stamp above a nice cover, your page will look unbalanced. Aesthetically, you could improve it by showing a mint multiple rather than a single stamp – maybe a corner block or plate block; or for lithographed stamps, a transfer block. If the transfer block is quite small, as it is for Batum Tree stamps, then you may be able to make rapid progress.

But like Central Lithuania covers, mint multiples are not always easy to find and in some cases probably don’t exist. If you are collecting Imperial Russia, you can buy for four figures a copy of #1 on cover. But, I am afraid I have to tell you, you can forget about a mint block of four.

If I was starting out again as a dealer, I would be tempted to specialise as follows: I would buy old dealer stocks which included mint multiples and part sheets which had never got separated into single stamps. And I would try to create a stock of small blocks, strips and so on for stamps issued say before 1940. They would be MNH** with full gum. As time passes, it will be harder and harder to find those old dealer stocks but even twenty years ago I could have made a lot of progress.

Posted by Trevor Pateman at 23:40 No comments: