A Curious Fact about Ukraine Tridents 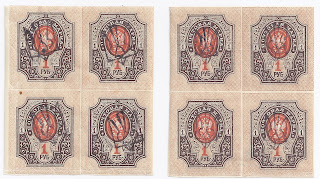 Collectors, dealers and speculators who made it up as they went along - all these people got involved with Ukraine Trident production and some of them tried to get limited edition specialities created to make a fast buck. In some districts they were successful - Odesa for instance - and in other districts they seem not to have had much influence. In some cases we can link an individual name to a particular "Philatelic" Trident variety - Svenson, Trachtenberg and so on.

But it's a curious fact that with  few exceptions (mostly in Kyiv), no one fools around with ink colours. Maybe post office officials said No to that - it would confuse matters too much for clerks handling mail. In Odesa, for example, whether they are upside down, sideways or whatever, the handstamped tridents are always black. Exceptions are rare and don't look like deliberate creations.

The only examples I have ever seen do not look at all like deliberate colour varieties: in the two blocks of four above which have violet in the ink you really have to look for it (click on image to get a full screen view). To me, it looks like there was a bit of violet in the ink pad and that's about all. In contrast, as far as the left hand block is concerned (with Odesa Vb, Bulat 1253 - a stamp on which there are quite a lot of odd varieties listed) what you first notice is that the trident has been applied at an angle - to my mind, probably deliberately at someone's request. But the ink variety is almost unnoticeable.