The Romanovs and Philately 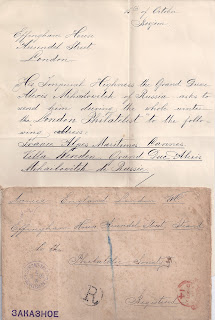 The Grand Duke Alexis Mikhailovich (1875 - 1895) was the son of Grand Duke Michael, Governor of The Caucasus, and Grand Duchess Olga Fedorovna. This is a letter from his Secretary (I guess), addressed to the Philatelic Society (forerunner of the Royal Philatelic Society of London) and publisher then (as now) of The London Philatelist.

Alexis died in 1895 from tuberculosis.