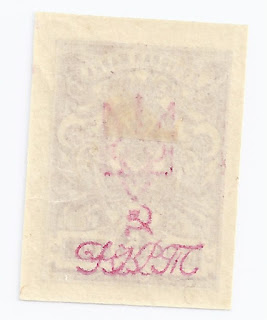 Above are some forged Trident overprints. All have the large red Soviet guarantee on the reverse which Alexander Epstein identifies as a forgery dating from the 1950s or 1960s. On the example I have chosen to turn over, both the Trident showing through and the forged guarantee mark appear to have been struck from the same ink pad.

Of these, those on the 1 kopeck can be found mint (though I have none in stock at present: see Lot 88 in the Corinphila sale of Ron Zelonka's collection for an illustration) and so can those on the 10 kopeck, also mint. On the latter, the ink is very distinctive: 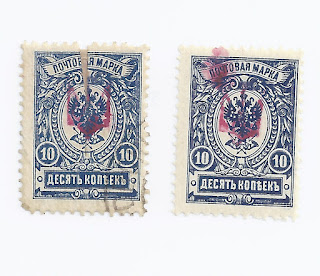 The mint copy on the right is signed Dr Seichter - I have chosen this copy with an ink smudge to emphasise the colour of this overprint.In the Ron Zelonka collection there were significant quantities of this stamp ex-Seichter including two blocks of 25 sold as a single Lot (Lot 90 - illustrated in the catalogue). However, the damaged used stamp on the left is rare. It is from the Philipp Schmidt collection and was seen and OKd by Dr Seichter.

The 3 and 5 kopeck are much more problematic. I am holding the two stamps below but would hesitate to sell them. They are both plausible as Katerinoslav I Tridents but completely different in style to the 1 kopeck and 10 kopeck overprints: 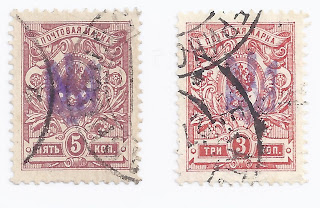 On the 5 kopeck I cannot offer an interpretation of the cancellation but on the 3 kopeck it is clearly EKATERINOSLAV in both cases. 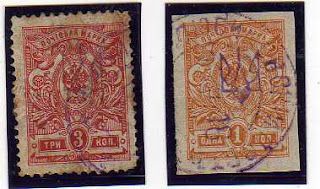 Alexander Epstein (Tallinn) provides the very useful images above. They show violet Katerynoslav I Tridents on used stamps - and both stamps have cancellations in violet from LYUBIMOVSKI POST. This suggests that a Trident handstamp was sent to Lyubimov where the violet overprints were then made. Note the fine, sharp style of the overprint which can also be seen on this block from the Zelonka collection. These overprints are not at all like the violet ones I illustrated above. It does look from this block as if this was a handstamp with five positions - see how position 5 is dropped a little in each row: 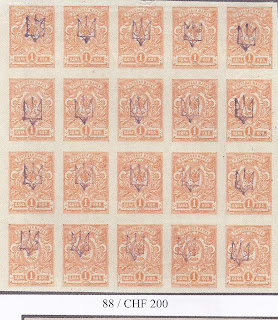 To make matters more complicated, Bulat lists "Special Katerynoslav Types" which are basically single handstamps in the style of Katerynoslav I (Bulat 844 - 854). They are all applied in black and as with Kyiv II single handstamps you should be looking for multiples to confirm that a single handstamp is being used. Unfortunately, these Special Types appear to be rare (only two are priced by Bulat, at $150 and $250)  I have put aside the two stamps below as possible examples of Bulat  852 but I don't think they can both be examples. The left hand stamp is signed UPNSZelonka (don't know why he signed it) and the right hand stamp has a small Soviet guarantee mark in violet - which would be unusual for any kind of ordinary Trident, so I think there is something going on here - I am just not sure what. These could be perfectly normal Katerynoslav I Tridents: 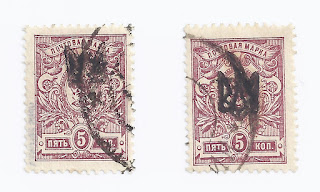 Apologies for the complicated Blog.