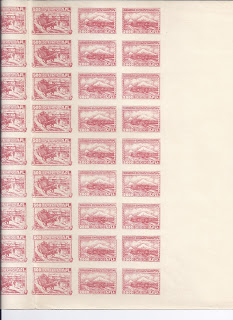 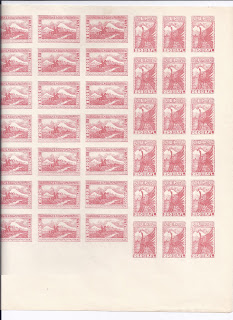 This Blog isn't a shop but today I am going to say I have something for sale.

The 1921 /22 Second Yessayan [Famine Relief] pictorials were printed in Constantinople, sent to Yerevan, and issued with surcharges. Unsurcharged copies are normally only found for the values which were not issued at all.

To meet demand for the stamps, Reprints were produced (probably unofficially) by the printer of the original stamps, V M Yessayan. He made two sets of Reprints. The Original stamps had been produced, as normally, one value per sheet. For the First Reprint, Yessayan economised on his lithographic plates by resetting all values onto two sheets - maybe they were one large printer's sheet originally. Each value is printed 18 times, except for the 5000 rouble which has 21 impressions. So there are 147 stamps in total, printed on white paper which is ungummed about 50% of the time and otherwise with a white gum
For the Second Reprints, Yessayan put everything onto one sheet. The sheets are always gummed and the gum is yellow.

I have one set of First Reprint sheets, partly illustrated above - my scanner cannot accommodate the whole sheets. I could cut 18 sets of 8  from these sheets - which is what packet makers did in the 1920s and 1930s -  and I would sell a set for 80 euros (10 euro each fresh never hinged - ungummed - stamp). So the potential total for 18 sets is 1440 euros.  But I don't want to cut these sheets which, for example, show a se-tenant arrangement not found in the Originals and which changes again for the Second Reprints. Are they of interest to anyone as they are?