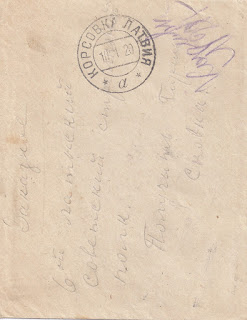 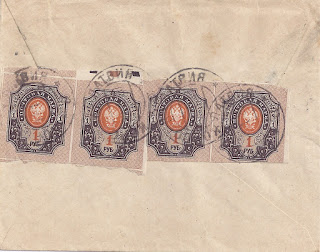 When I think of the Bolshevik Occupation of Latvia, I think of Riga and the philatelic covers with Chainbreaker stamps which are quite common. But this is only part of the story.

After the Armistice of November 1918, Germany lost power in the Baltics. The Latvian nationalists led by Ulmanis took control of Latvia but the  Bolsheviks also stepped in and proclaimed a Latvian Socialist Soviet [not Soviet Socialist ] Republic on 17 December 1918. Troops entered from the east and Riga was not the first area to be taken. And when Riga was recaptured by nationalist Latvian forces on 22 May 1919, the Bolsheviks remained in control of "rump" areas to the east until the beginning of 1920 when combined Latvian and Polish forces drove them out.

This explains the cover above. It's easy to think that the cancellation on the front "KORSOVKA LATVIJA "a" 10 1 20" is an old Imperial canceller - until you realise that there was no such guberniya as "Latvija" . There was Kurland and Lifland and so on. The canceller is a new post-revolutionary cancellation and the clarity of the cancellation suggests that the canceller has seen very little use. It is a Bolshevik-prepared cancellation for the new Latvian SSR. However, registration details are all in manuscript.

On the reverse, the 4 rouble franking corresponds to that for a registered letter in the Russian SFSR. The letter is addressed to the 6th Latvian Soviet Infantry Division. Korsovka is now Karsava in Latvia and it is a town in the east, very close to the border with Russia

I haven't seen anything like this before - and I am reminded of the second World War when both German and Russian occupying forces arrived in newly conquered areas with shiny new cancellers  ready for use.