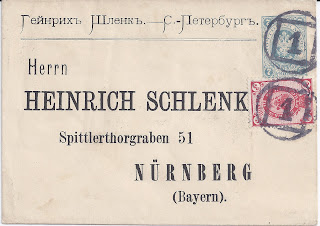 Some postal administrations produced postal stationeries to order. This is true, for example, of Great Britain and the Austro-Hungarian Empire. Such Private Order stationeries are often attractive (for example, using distinctive papers) and popular with collectors, Sometimes Private Order stationeries  were  taken back to have the face value modified (usually by the addition of a second value imprint) when postal rates changed. For Great Britain, there are detailed listings in Alan Huggins and Colin Baker, Collect British Postal Stationery (2007)

In Imperial Russia, Private Order stationeries were produced but they are rare. Basically, one must look for envelopes in sizes which are not listed in Michel and  refer to specialist publications such as A. Ilyushin and O. Forafontov's 2004 Moscow - published catalogue of Imperial Russian stationeries, which covers the period 1845 to 1917.

Rather different to a Private Order stationery is one which has been privately modified - for example, by the addition of a pre-printed address or advertising matter or both.

When I first saw the little 7 kopeck cover shown above (cancellations on the reverse show it was used in 1891), I thought it must be a Private Order envelope. But the measurements are 115 x 82 mm which  means it is surely an example of Ilyushin and Forafontov's regular stationery # 40, for which they give 114 x 81 as one standard version. (The rare version of this 7 kopeck envelope measures 95 x 70)

Nonetheless, it's a very attractive little envelope and you can see why there are collectors for such private modifications to standard stationeries.