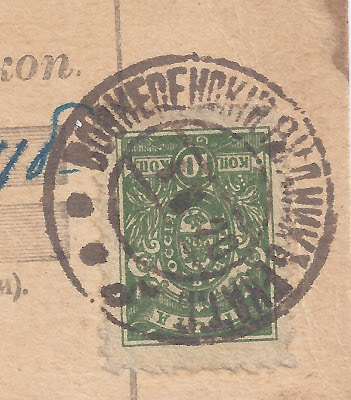 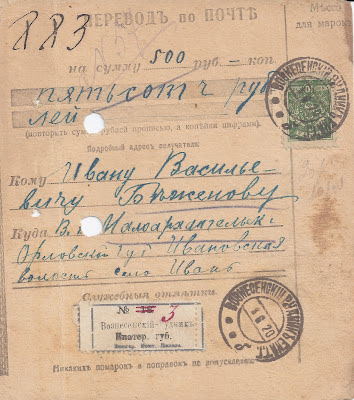 The perforated Denikin stamp shown on the Money Transfer Form above is likely to remain a puzzle. It is being used in the Soviet period, revalued x 100 times. It has a heavy strike of the postmark of VOZNESENSK - RUDNIK, EKAT [erinoslav] 8 6 20, tying it to the card in such a way that it rules out any kind of manipulation of the stamp after use.

It is being used in an area of Ukraine occupied by Denikin's forces, so is a stamp left behind and now used as a Trophy stamp. The card is addressed outside Ukraine to Ivan, Orlovsk where it did indeed arrive 15 6 20.

It is perforated 9.5 - 10, so not the gauge used for officially perforated rouble value Denikins.

So who did it? The postmaster in this small office? It seems unlikely. But who else?

The only way to begin to solve the puzzle is to find more examples of low value Denikins perforated like this and maybe cancelled from the same office. Out there, such stamps probably exist, since when you perforate stamps you perforate sheets of them.

(This Money Transfer Form was in the Robert Taylor collection)