Agathon Fabergé accumulated a very large collection of Imperial Russian fiscals and it passed to his son Oleg who added to it. But it was never written up properly and passed to another Finnish collector (B E Saarinen I believe) who then disposed of it to another collector and a dealer/collector. I bought from both of them, purchases which were several years apart.

The collection included large quantities of scarce stamps - for example, hundreds of Baku Court Fiscal stamps. Nearly all of those now on the market are ex-Fabergé though most of them don't have any identifying pencil notes.

There was also a quantity of Imperial fiscals for the courts in Warsaw and Lublin - more of the Lublin than the Warsaw. Today I looked through what I now have left: 3 Warsaw and 15 Lublin and tried to see what I could learn from these remainders. I have never seen Court Fiscals from other Polish cities.

A key item proved to be this right marginal pair. It also has wide margins at the top and the bottom from which I conclude that the stamps were printed in multiples of  ? x 2. So you would expect all stamps to have at least one wide margin at the top or bottom. This is true of another 9 of my stamps but not true of just 3. However, it is common for clerks to trim imperforate stamps just as it is common for clerks to remove the selvedge of perforated stamps:


Then I wondered if it was possible to plate these stamps - as it is for the very easy Baku fiscals - but I could not make any progress. However, looking at my Warsaw stamps I concluded that the background network is the same as that on the Lublin stamps - and so was printed from the same plate. The network is a bit complicated but is not perfectly symmetrical - you can see in several places what looks like a W with a crown over it. That means that stamps with inverted backgrounds could exist: 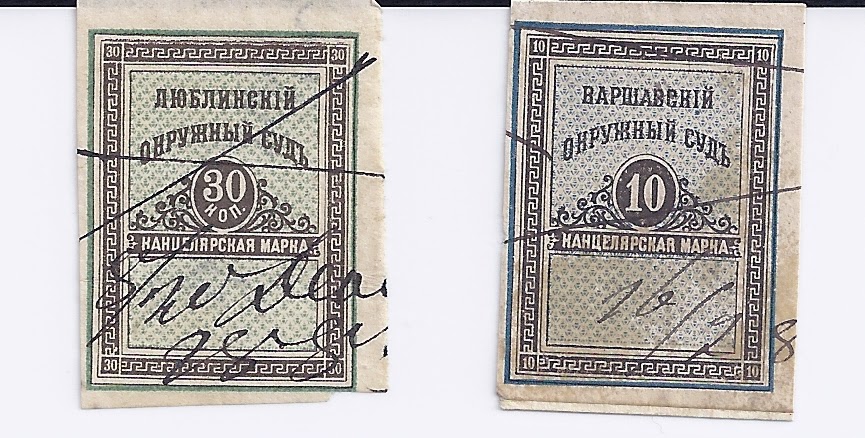 
I asked myself if the frame and value tablets were also from the same plate for both cities with the city name added separately. But on all my copies, the city name shows no variation in position with respect to the frame and value tablet - so I conclude that there were separate plates for the text - a hypothesis supported when you look at the value "30" on the Lublin plate and the Warsaw plate. The "30" of Warsaw is thicker than the "30" of Lublin. And not just that: underneath the "30" of Lublin is the word "KOP" which is absent from the Warsaw stamps of both 10 and 30 denominations ...

Printing Method? Hmmm.... looking at the backs of the stamps, the outer frame line in solid colour could be typographic, laid down first to guide the printing of the backgrounds and the text. Both of those could be lithographic. But I am not confident about this - and it implies three passes to print the stamps: frame line, background network, text
Posted by trevor pateman at 02:49