Late Use of Ukraine Tridents (continued)

Latest known use of any stamp is problematic. Even if a stamp is officially invalidated, an individual who has a copy in a pocket book may use it – and get away with it. No one notices; no one imposes Postage Due. This is really of no great interest.

More interestingly, there are cases where a stamp is invalidated – and then, out of necessity, officially brought back into temporary, provisional use. For example, Imperial Russia’s 1913 Romanov stamps were invalidated in the RSFSR at the same time as kopeck value Imperial stamps were revalued x 100, in March 1920. However, some later uses of 20 / 14 kopeck Romanovs on official formular cards (Money Transfers, Parcel Cards) are known and these look like uses which some postal district or at least some local postmaster has authorised because of local stamp shortages (which were common in revolutionary Russia). See my Blog about this dated 10 February 2011

Similarly, with Ukraine Tridents it seems that they were invalidated sometime in 1921 (I still need an exact date). However, 1922 uses can be found in south Ukraine. This is an area which Alexander Epstein and Thomas Berger have identified as an area of stamp shortages at that time, leading to the use of technically invalidated stamps and to the local revaluation of stamps to useful denominations (rather than revaluation to officially designated values). Alexander Epstein has two article on these topics in Ukrainian Philatelist # 102 (2009); Thomas Berger and Alexander Epstein have an article in the Deutsche Zeitschrift für Russland Philatelie # 101 ( 2014) 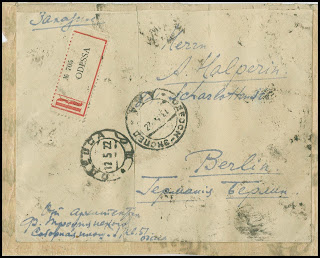 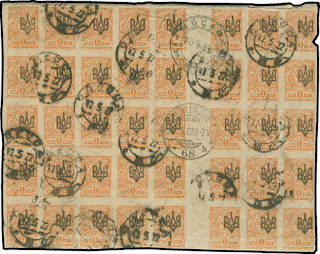 The above item was in the Robert Taylor collection and the images have been provided by Thomas Berger.

This is a Registered letter which does not look philatelic sent from ODESSA 12 5 22 to Berlin, with a Berlin receiver on the reverse. The forty Odessa type 2 Trident overprinted 1 kopeck stamps have been revalued, following the RSFSR scheme to 1 rouble each to yield a 40 rouble franking. It's possible that the sender supplied the stamps, but for a Registered letter they at least had to be accepted by a post office clerk - the clerk who cancelled them at the counter. And because these are one kopeck yellow stamps, there is no missing the Trident overprint. 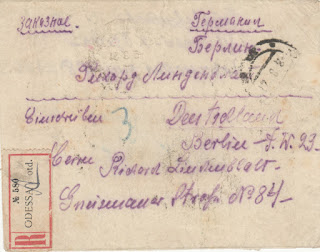 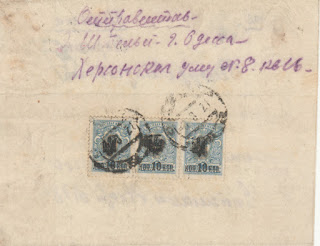 This is also a Registered letter from Odessa to Berlin and again looks non-philatelic. The stamps are cancelled ODESSA 8 8 21. But this time the Tridents are examples of Poltava type 1 - but they are rare stamps, Bulat # 987 catalogued $140 each.

It's true that Poltava tridents were at some time in post offices in Podilia and can be found on official formular cards, so it's possible they were also in  Odessa post office. However, the use of rare stamps out of their district of origin does (to my mind) make it less likely that these stamps were being used up by Odessa post office. But the 1921 date on this letter makes it possible (likely, even) that they were used before any official invalidation of tridents.

Here is another example of 1922 use, sent to me by Alexander Epstein: 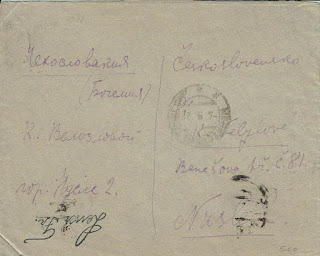 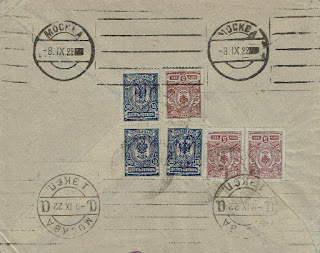 This is an ordinary letter sent from Molochansk, a Mennonite community in Taurida, to Czecholsovakia routed through Moscow. The stamps are cancelled 6 or 7 9 22. Revalued x 100, they yield a correct 45 rouble franking. But note ... the three 10 kopeck stamps are overprinted with Kyiv type 2 Tridents, clearly not so visible as on one kopeck stamps and which could have been missed by a clerk. Nonetheless, the letter looks non-philatelic and is the latest recorded date for any use of Trident stamps on a travelled letter. It is a bit problematic that these are Kyiv tridents: those Tridents did find their way into Podilia stamp stocks and maybe into Kherson and Katerynoslav stocks.But you would expect Molochansk to have stocked Odessa or Katerynoslav tridents.

What we really need is examples of Tridents used in late 1921 and into 1922 on official formular cards. In my previous Blog on this topic, I could not find any such official use later than May 1921. (See  my Blog for 23 September 2011)