I am one of those who thinks that there was no postal service which used the stamps of the (White) Russian Refugee Post in 1920 - 1921 and that all the covers and cards which exist were produced by a group of philatelists sitting round a Constantinople table. No doubt they were inspired by the presence of so many Russian refugees in Constantinople following the evacuation of General Wrangel's forces from Crimea at the end of 1920 but my assumption is that those refugees were expected to make use of the Turkish postal service.

Nor do I think that the pre-war Russian post offices re-opened in Turkey after the end of World War One, though there were philatelic speculators who hoped they would and who prepared stamps in anticipation - the ROPIT overprints on old Russian Levant stamps (which they were clearly able to obtain in quantity) and the elaborate "Ship" fantasies probably printed in Constantinople by the Armenian printing company of V M Essayan (Yessayan).

But there are other questions to be asked, especially about the immediately preceding period 1918 - 20. For example, were Ukrainian governments or White Russian governments (Denikin, Wrangel) able to connect to any international postal service and if so how. It is known, for example, that Trident - franked covers did leave from Odessa /Odesa on British ships and probably on ships of other nationalities though the status of the frankings is obscure because they are often left uncancelled but then have cachets added indicating, for example,  "Received from His Majesty's Ships" and no Postage Due to be levied.

Below is an intriguing ordinary letter for which I have not seen any similar examples. It is addressed to a company in Denmark and has an ordinary machine receiver cancel on the back dated 17 October 1920, a month before White forces were finally defeated in south Russia and Crimea. It started out from MELITOPOL TAVR [ Taurida] 5 9 20. At this date Melitopol was still under White control - it was taken by the Red Army at the very end of October 1920. 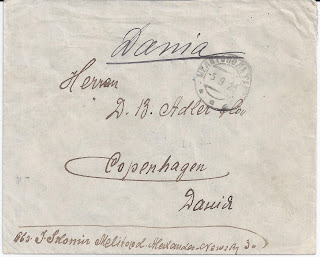 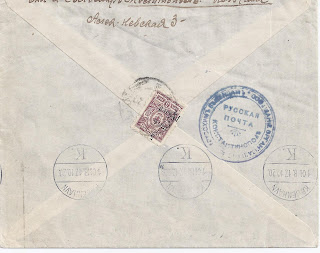 
The letter is franked by a single copy of a late Wrangel / Crimea issue which revalues an Imperial 5 kopeck perforated stamp to 5 rubles by means of a simple typographic overprint.  Curiously, this looks exactly like a Soviet x 100 revaluation created following the revaulation instructions issued in March 1920. Even more curiously, and perhaps relevantly, in the second RSFSR Foreign Tariff of 1920 the tariff for an ordinary foreign letter was 5 roubles so by the time it reached Denmark, this letter would look exactly like a correctly franked foreign letter arriving from Soviet Russia.

But this is definitely a White letter which was routed to Constantinople where it received some kind of transit mark. But not an Ottoman Turkish one. The blue mark reads in the centre Russian Post / Constantinople and around the outside Russia Refugee Aid Organisation - basically, a Hilfskomite. This suggests to me that mail carried by boat from White-controlled southern Russia to Constantinople was handed over to this Russian organisation which was able to organise onward transmission as required and without having to add any new (Turkish) franking to the letter. The presence of the Danish receiver mark suggests that this letter was entered into the Turkish mail stream in Constantinople by an organisation empowered to do just that.

The addressee D.B.Adler was a private commercial bank (a Handelsbank) which had conducted business with Russia before World War One. The sender has an unusual and I assume Jewish name, Solomir, if I have read it correctly.

Does anyone have any information about the Russia Refugee Aid Organisation?

Added 5 December 2016: Thomas Berger spotted this item in the December 3 2016 David Feldman auction. It confirms the possibility of sending White mail abroad as late as October 1920 and again shows the Constantinople cachet facilitating the onward transmission of a letter to a third country, in this case Bulgaria: 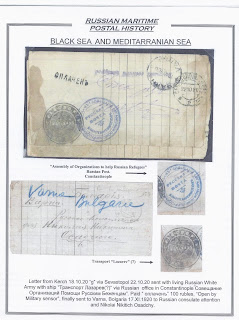 Added 17 December 2016: Thomas Berger has found images of the cover below in a Lot sold in the 2011 Zelonka sale (Corinphila auction, Lot 158). So now we have three solid examples of White mail from South Russia routed through Constantinople to foreign destinations - and arriving there without postage due being raised: 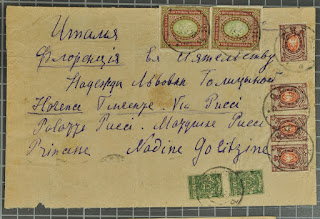 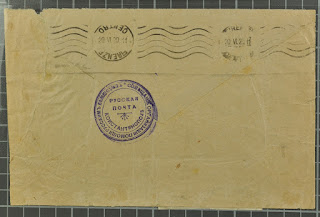