Russia: The Office for Government and Diplomatic Correpondence

Howard Weinert in the USA sent me a query about the cancellation used by the Office for Government and Diplomatic Correspondence, in St Petersburg and then in Petrograd. When did the cancel go out of use? Iain Baillie and Eric Peel in their work on St Petersburg postmarks record no Petrograd-version examples after 1916. However, it can be found used in 1917 even after the Bolshevik Revolution - I have two examples as shown - and Howard Weinert has an example from 1918, also shown below. So the question is, When did it go out of use?

The Soviets moved the capital from Petrograd to Moscow in March 1918, largely because of the vulnerability of Petrograd to German attack. Even before, some embassies had moved out to Vologda with Soviet assistance. Despite this, the cancel is still in use in April 1918 on the Weinert cover.

How long did it continue in use? Was a new office created in Moscow and did it have its own cancellation?

My November card is addressed from Station Vyiya on the Bogoslov railway to the Italian Embassy in Petrograd, where the Government and Diplomatic office handled it on 6 November 1917. My December card is addressed to the Swedish Mission (or Legation) from Sukhrinskoe in Perm guberniya and was handled by the Government and Diplomatic office on 10 December 1917. Howard Weinert's 1918  item is fully written up below: 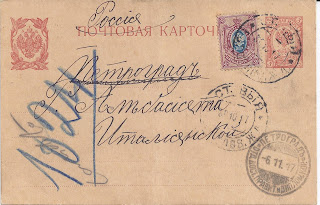 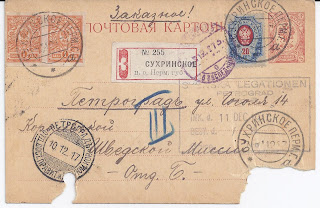 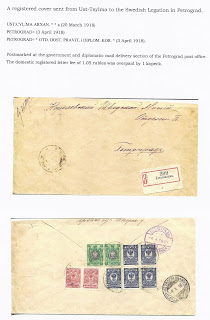 Added 9 November 2016: Here are two more I found, one from September which is addressed personally to Alexander Kerensky - it's from a provincial lawyer who fancies a job in Petrograd. The other December card is another Swedish Legation item: 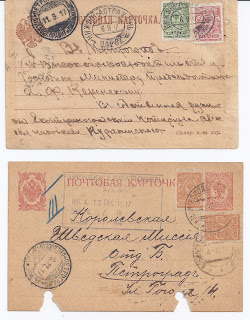